The recent announcement to acquire Spanish mobile robot company ASTI by global industrial automation player ABB underlines something we all knew: AMRs (autonomous mobile robots) have a big future in the industrial sector

While we cannot say what ABB paid, we do know that ASTI is aiming for 2021 revenues of roughly $50m. We also know that, having enjoyed growth of over 25% in recent years, and also itself having acquired Germany-based InSystems Automation in 2019, ASTI is now the 4th largest vendor of mobile robots in Europe by revenue.

ASTI has been around for 35 years and employs over 300 people. As such, it is a well-established player in a market that is better known for recent start-ups. Another thing that sets ASTI apart from many competitors is the range of industries it serves: whereas many AMR companies have a dominant focus on ecommerce and warehousing, ASTI is well established in a range of industrial and manufacturing markets. And this will be an important part of the reason they have attracted the attention of ABB. So, what can we learn from the ABB-ASTI deal?

AMRs are coming to a production line near you

It’s hardly a surprise that AMRs are going to become widely used in the world’s factories. But this move from ABB does indicate that the shift toward using mobile robots on the production floor is going to be deep and profound. ABB is one of the world’s biggest automation groups, and its customer base is very largely industrial. It is also arguably a conservative company – and it would not be buying ASTI unless it saw serious short-term potential for the deployment of AMRs in factories on a much wider scale than is currently the case.

At Interact Analysis, the research shows that the market for mobile robots in manufacturing environments will generate more than $13bn in cumulative revenue in the next four years. This compares to a market of $19bn for mobile robots in logistics in the same period. The ASTI acquisition is likely to be customer-driven, and it seems almost certain that some of ABB’s major industrial customers are already moving fast to implement mobile robots as part of flexible production set-ups on their manufacturing lines. By buying ASTI, ABB has ensured that it has a ready offering for such customers.

The industrial robot market is dominated by a relatively small number of suppliers, and ABB itself is the third largest vendor of fixed industrial robots in the world. The company is almost alone among its peers in having acquired a mobile robot capability. The other main example being Omron which purchased mobile robot vendor Adept in 2015, and used the technology to create a successful integrated offering for vendors of both mobile and fixed robots.

Further mergers and acquisitions in the mobile robots space are, of course, guaranteed, and it seems a fair bet that the pace will increase. Major ABB industrial robot competitors such as Fanuc or Yaskawa are likely to now see a definite need to develop AMR technology (and it’s likely they already had plans afoot to do so even prior to this deal).

Many AMR companies are under ten years old, and many are at a difficult stage: a stage where they need to decide whether to cash in now, or to put in the significant investment that the next level of growth will demand. In a crowded market, only a small number can successfully proceed to that next level. What the ABB acquisition shows is that buyers of AMRs can pop up in unexpected corners. 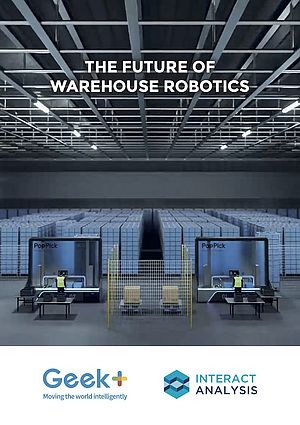 The Future of Warehouse Robotics

Until today, autonomous mobile robots (AMRs) have been deployed in isolated workflows in warehouses with no real integration across multiple processes in the same building. This is changing. 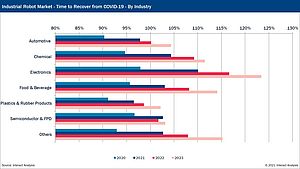 After an arid 2020, when cobot revenues saw negative growth for the first time, growth is predicted to be of the order of 15-20% year on year up to 2028 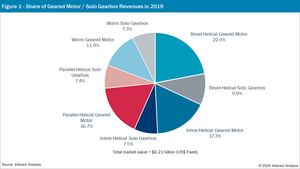 Following a report highlighting a contraction of over 7% in 2020 in the industrial gearbox market, Interact Analysis released a follow up focusing on light-duty geared motors and solo gearboxes 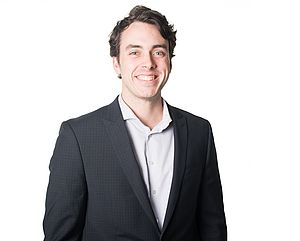 Predictive Maintenance: Why is the Market Growing Now?