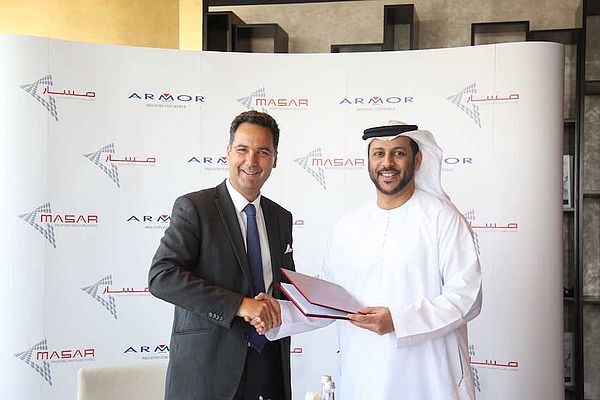 United Arab Emirates, Armor and Masar Printing and Publishing signed a memorandum of understanding on the creation of a future joint venture (JV) in Dubaï, United Arab Emirates on June 30, 2019. The agreement has the objective to develop the flexible organic photovoltaic film market in the MENA region (Middle East and North Africa) in order to create a future market leader in the region. The government of Dubai is seeking to achieve installed renewable energy capacity of around 1 gigawatt per year, the equivalent of one nuclear unit. The number of sunshine days per year in the region opens up the path for the deployment of solar energy on a massive scale. Due to limited areas in the modern cities, the transparent, ultra-thin and flexible ASCA organic film developed by ARMOR is ideal for covering the facades of the numerous skyscrapers within the Emirate. This deployment opportunity has been clearly identified and anticipated by the two new partners, notably within the context of the World Expo 2020 to be held in Dubai.

Signed by Faisal Bin Haider, CEO of Masar Publishing and Printing, and Hubert de Boisredon, Chairman and CEO of Armor, the agreement opens up the path for the creation of a joint venture which will be the first company in a position to market flexible organic photovoltaic films in the MENA region. It represents a step that is fully in keeping with Dubai government policy, encouraging the deployment of renewable energy on a massive scale.

The Dubai Clean Energy Strategy 2050 calls for 75% of energy consumed in Dubai to be from renewable sources. "By signing this agreement with Armor, we are reaffirming the commitment of Masar Publishing and Printing to always be at the cutting edge of technological innovation and to gain inspiration from the best international practices. With Armor, we are determined to become a heavyweight in the solar energy market in the region", declares Faisal Bin Haider.

The two partners are giving themselves 5 years to deploy their technology, with a long-term objective of over 500km2 of photovoltaic film sold each year and annual revenue in excess of €100m. The JV should be up and running by late 2019. Its first objectives will be to establish personnel on the ground and to provide training on the new technology. Each company will have a 50% stake in the future JV. Masar Publishing and Printing will deploy its expertise in the local market and Armor will provide its unique know-how. The project will benefit from Armor's unique global production capacity of 1 million m2 of film per year.

Within the framework of the JV, the two companies will target multiple customer segments: energy specialists, naturally, but also real estate companies, construction companies, the IoT, the connected city and vehicle recharging stations. "The potential is vast!", enthuses Hubert de Boisredon, Chairman and CEO of Armor. "This partnership with Masar Publishing and Printing is an exciting opportunity for Armor to spread the ASCA organic photovoltaic film technology within the MENA region, which offers extremely high development potential."