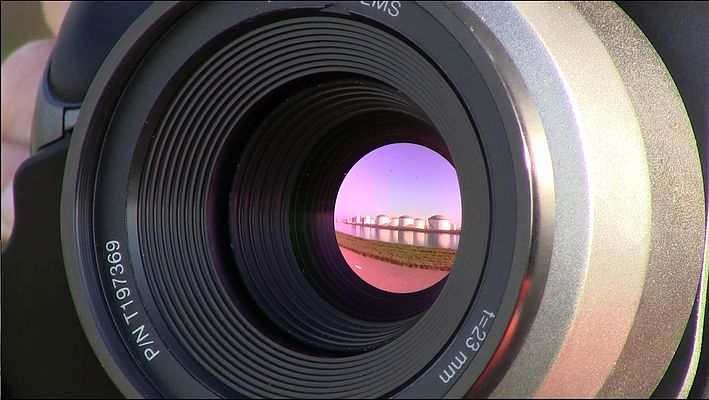 Optical gas imaging cameras can detect small leaks from several meters and big leaks from distances of hundreds of meters. 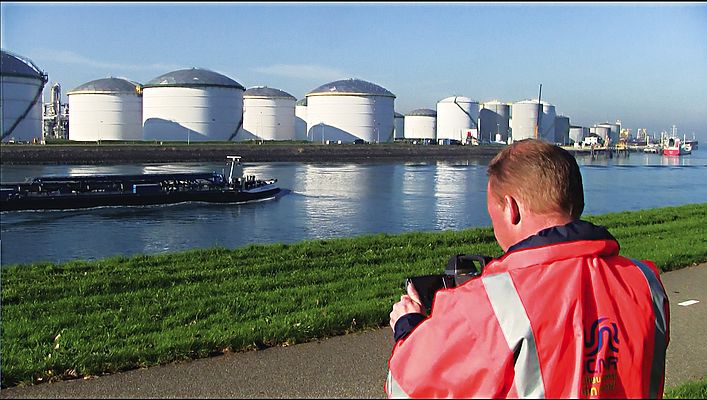 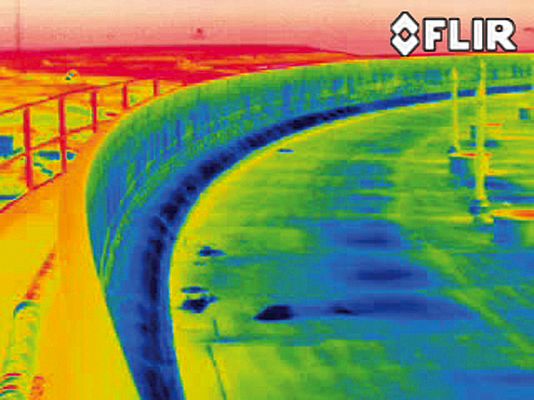 Close range inspection with the FLIR GF320 optical gas imaging camera revealed that this tank was leaking all along the rim.

Some industrial, pharmaceutical and petrochemical plants emit gases that can harm the environment and impede the health of company employees and inhabitants of the surrounding area. Environmental protection agencies have the responsibility to make sure that these emissions fall within governmental and international policy guidelines. To help them with that task, environmental protection agencies can use an optical gas imaging camera.

One of the first European environmental protection agencies to embrace this technology is the Dutch agency DCMR Environmental Protection Agency Rijnmond. "This technology helps us to get a clear view of the real life fugitive emissions by companies within our jurisdiction" explains Rob van Doorn, technical manager of DCMR. "This really is a great tool for agencies such as DMCR to actively and efficiently enforce emission control policies."

Arguably, the most important task of the DCMR is to uphold the regulations regarding fugitive gas emissions, as it directly influences the health and quality of life of inhabitants in the surrounding area. According to Van Doorn it was very difficult, however, to monitor fugitive emissions before the purchase of the FLIR GF-Series optical gas imaging camera. "There are calculations and models that can be used to attain a theoretic value for fugitive emission of storage tanks and pipelines and such, but many recent international studies have shown that the real life emission figures are usually much higher than the theoretical value predicted by the formulas. These formulas do not take into account the possibilities that storage facilities might contain broken man holes that do not close properly without any of the company employees noticing or other forms of unnoticed maintenance issues which may cause additional fugitive emissions."

At first Van Doorn hired external consultants to investigate the real life fugitive emissions. "We soon found that this was not an efficient solution in the long term, however. Consultants charge hefty fees for each inspection and with the inspection frequency we wanted to achieve the total of fees would exceed our budget. That is why we decided to look into buying a fugitive gas monitoring tool ourselves."

IR cameras require little to no training
After comparing several techniques Van Doorn and his colleagues opted for a FLIR GF320 optical gas imaging camera. "The external consultants we had hired previously utilized technologies like SOF (solar occultation flux) and DIAL (differential absorption light detection and ranging). Although these techniques are robust and can quantify the emissions these technologies are very expensive to purchase, they are unwieldy, requiring large trucks to carry the equipment, and also complicated to use, requiring a lot of training to be used effectively. In comparison the GF-Series camera is a much more affordable solution. It is also compact, lightweight, portable, and it is very easy to use, requiring very little training."

An optical gas imaging camera is a quick, non-contact measuring instrument that can immediately give the camera operator an overview of the situation. It can also be used in hard-to-access locations, since it can detect small leaks from several meters away and big leaks from hundreds of meters away, and it can also show leaks in moving transport vehicles, such as tanker trucks, but also barges and rail wagons.

User friendly
The purchase of the FLIR GF320 optical gas imaging camera included a three day training course at the Infrared Training Center (ITC) for the inspectors that were expected to work with the camera. According to Van Doorn the FLIR GF320 optical gas imaging camera is very user friendly. "I was surprised to see that we were able to work quickly and efficiently with the camera, attaining a high level of accuracy, immediately after the three day training course. And perhaps that three day course was not even necessary, to be completely honest. The camera is so easy to use that you can probably even use it to ascertain whether or not a leak is present without any training whatsoever. You could say that it is rather self-explanatory."

Infrared absorption
The FLIR GF320 optical gas imaging camera contains a cooled Indium Antimonide (InSb) infrared detector that produces thermal images with a resolution of 320 x 240 pixels at a thermal sensitivity 25 mK (0,025 °C). The gas visualization functionality of the FLIR GF-Series optical gas imaging cameras is based on the absorption of electromagnetic radiation in the infrared wavelength by gases. Most gases absorb infrared radiation at specific wavelengths. In other words, there are infrared wavelengths where the gas is essentially opaque. All FLIR GF-Series optical gas imaging cameras contain a spectral filter, a focal plane array and an optical system that are all specifically tuned to very narrow spectral ranges where certain gases absorb infrared radiation. With the gas absorbing the infrared radiation and effectively blocking the radiation coming from the objects behind the leak, a gas leak will show up as either a black or a white plume in the thermal image, depending on whether the user opted for the 'white hot' or the 'black hot' settings.

These chemical compounds and gases are normally invisible to the naked eye, but due to the infrared absorption properties of these gases the FLIR GF320 optical gas imaging camera allows the inspector to see gas leaks as moving smoke-like plumes in the real time thermal video footage displayed in the eyepiece or on the LCD screen of the camera.

Video archiving
Apart from real time visualization the FLIR GF320 optical gas imaging camera is also capable of recording both visual light video and thermal video footage. "This is very important, because the moving smoke like plume shows up much more clearly in a video than in a still picture", explains Van Doorn. "So for the reporting of leaks the ability to record video is crucial."

During an inspection the operator often makes many video recordings. Keeping your video archive tidy can be a challenge due to the sheer quantity of recorded videos. To make this task a little bit easier the FLIR GF320 optical gas imaging camera automatically embeds GPS location data in the video recordings. With the date, time and GPS data embedded in the video's metadata it is much easier to keep your video archive tidy.

High Sensitivity Mode
The High Sensitivity Mode (HSM) is an additional special feature included in all GF-Series optical gas imaging cameras. It is an image subtraction video processing technique that effectively enhances the thermal sensitivity of the camera. The HSM feature subtracts a percentage of individual pixel signals from frames in the video stream from the subsequent frames, thus enhancing the differences between frames, which make leaks stand out more clearly in the resulting images.

Preventing future emissions
"We've been working with the camera for some time now and it has allowed us to detect leaks and ascertain regulation transgressions that would have remained undetected without the camera. Storage tanks that we always supposed to be in good working order and well maintained turned out to be leaking quite badly. This allowed us to take action in order to prevent further emissions. So I would definitively say that it has already proved to be worthwhile."

Introducing the FLIR A6780 Mid- and Longwave Thermal Cameras

Test & Measurement
Thermowells have become well-established for measuring temperature in industrial applications worldwide, but with the emergence of digitally-enabled non-invasive temperature sensors there is an alternative
Read more