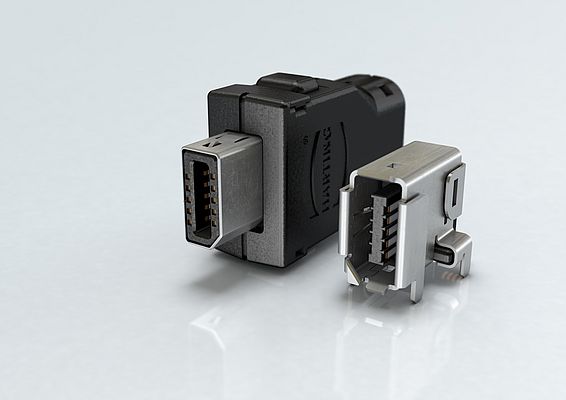 With ix Industrial HARTING and HIROSE collaborated to develop a new connector for the Internet of Things (IoT). The ix Industrial is a new miniaturised Ethernet interface for high data rates. At the same time, the two partners have jointly standardised the mating face in accordance with IEC/PAS 61076-3-124. The ix Industrial® socket and connector are both designed to be significantly more robust then standard RJ 45. With performance in Cat. 6A, the ix Industrial® mating face is configured for 1/10 Gbit/s Ethernet and therefore future-proof. High current load capacity accommodates the PoE applications of today and tomorrow. It therefore combines data transmission and power supply in one interface. Customers require less space for their connection technology. The production is planned to start on April 2017.

ix Industrial® and its two comrades T1, for for single-pair GBit Ethernet and M8 are campaigning for better performance in industrial data traffic. They are all smaller, more robust and more powerful than comparable connectors. Due to this small and robust design, they make fast Ethernet available to every conceivable application. The ix sockets are 70% smaller than those of the established RJ45.

This means that device manufacturers can use them in much smaller devices, allowing them to comply with the constraints of miniaturisation. Such devices might be the ever shrinking camera systems in which the traditional RJ45 socket occupies most of the space in the housing, or control units and small industrial computers. The socket has 5 THR shielding contacts for maximum stability on the PCB. Developers and manufacturers can easily integrate the new ix Industrial® system in new devices and have the assurance that this interface is firmly attached to the PCB and will withstand rough handling.