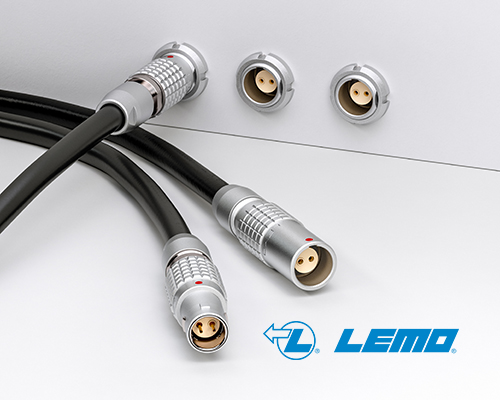 Based on transmission standards (IEEE 802.3), single-pair Ethernet (also called SPE or 1000Base-T1) is integrated into new generations of automobiles. 1000 Base-T1 is designed to operate over a single twisted-pair copper cable supporting an effective data rate of 1 Gbit/sec in each direction simultaneously.

LEMO provides two types of insulators 0B.511(2 contacts)  and 1B.512 (4 contacts + screen) compatible with Unshielded Twisted Pair (UTP) and Shielded Twisted Pair (STP), the new product is also available in a watertight version in the T series connector. The connectors are for the automotive and industrial data transfer.

The role of SPE is also to gain space and weight (with a more simple cable) also in other markets such as machine, robots and rail technology.

LEMO is the acknowledged leader in the design and manufacture of precision custom connection and cable solutions. LEMO's high quality Push-Pull connectors are found in a variety of challenging application environments including medical, industrial control, test and measurement, audio-video and telecommunications. LEMO has been designing precision connectors for seven decades. Offering more than 75,000 combinations of product that continue to grow through custom specific designs, LEMO and its affiliated sister companies REDEL, NORTHWIRE and COELVER currently serve more than 100,000 customers in over 80 countries around the world.

Electronics & Electricity
The modular design of LEMO products provides more than 75'000 different combinations of connectors with a large choice of contact configurations, such as high and low voltage, coaxial and triaxial, quadrax, etc.
Read more