Simplify the preassembly of interfaces for control cabinet 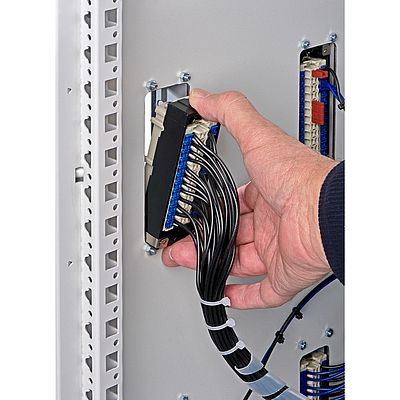 Harting introduced new rear mounting options for metal hoods and housings Han B, EMC and M series in order to facilitate the preassembly of interfaces for control cabinets. They offer the possibility to lock prefabricated inserts straight from the rear into the bulkhead mounting housing from the interior of a control cabinet. The insulation bodies are now added into a plastic holding frame that snaps carefully into the aluminum die-cast enclosure, supported by a lug. The flange rubber is laid completely into the interior of the housing to reach an IP65/66 protection compliance.

The preassembly of cabinet components become simplified and more efficient, indeed elements such as control cabinet, machine modules and cable harnesses can be prefabricated separately, thus, the prefabrication increases and the assembly costs decrease. Last, rear mounting inserts with a continuous 360° shielding will be available by the end of the year. With Han EMC, the shielding is always on the metal hood or housing, which requires a special EMC cable gland.