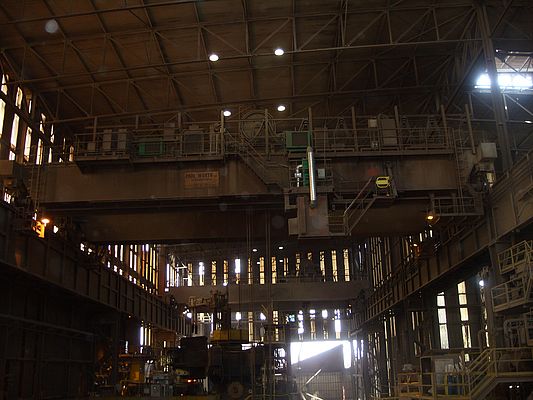 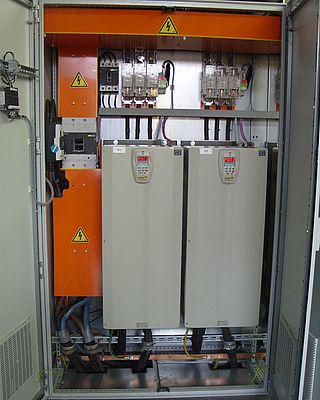 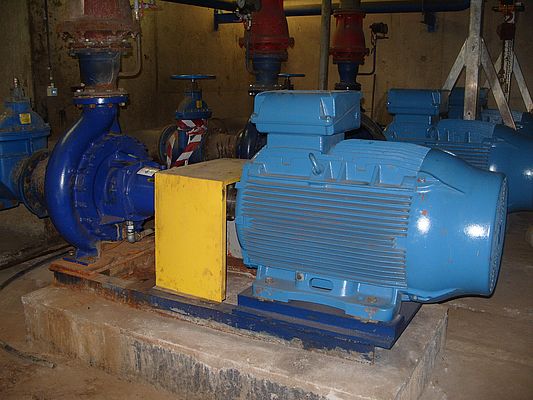 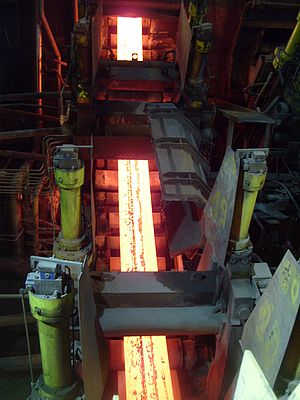 Engineering Steel Belgium (ESB) is saving €45,000 per annum on the operation of three cooling pumps on one of its electrical steel furnaces, since the installation of three WEG W22 132 kW, IE2 high efficiency motors, controlled by WEG CFW-09 variable speed drives. The equipment was supplied by WEG distributor, Leclercq Energy, to Processautomation, who supplied and commissioned the complete energy saving package, including control panel with drives, softstarters, PLC, and process supervision via Profibus-DP.

ESB, based in Seraing, Belgium, produces steel and related products for transport, energy generation, and aeronautics industries in Belgium. Its products include carbon and lightly alloyed steel, in the form of cylindrical continuous cast blooms, and bottom poured ingots for the manufacturers of open and closed die forgings, seamless rolled rings, train wheels, seamless tubes, and extruded parts, as well as bar rolling mills. Steel making is an energy intensive process, where even small efficiency gains can result in substantial energy savings and major reductions in operating costs. ESB is very aware of this fact, and also of the need to cut energy consumption to reduce its overall carbon footprint. One of the primary focuses of the company's energy reduction programme is its electric UHP (85 MVA) arc furnaces. These are cooled in a closed circuit cooling system, which includes three large pumps driven by 132kW motors.

Fully aware that the total cost of owning a pump is 90% energy consumption, ESB decided to replace the existing standard motors with three of WEG's new W22 high efficiency machines. Exceeding the energy performance requirements of the recently published IEC60034-30 energy efficiency standard, the W22 motors reduce losses by between 10% and 40% compared with typical motors. Although W22 motors made a significant contribution, on their own, to reducing the energy consumption of the three pumps, further potential for saving energy was prevented by the motor control system, which was achieved using contactors. This meant that the pumps were usually running at full speed, irrespective of the varying demands placed upon them.

At this juncture ESB appointed Processautomation, a company specialising in energy saving systems, to undertake a complete analysis of the kiln cooling process, with the goal of maximising the energy saving potential of the application. Processautomation began by conducting an audit of the operating hours of the pump system. This comprised three parts: normal weekday operation of two pumps (the third is a standby) totalling 94- hours a week; weekend operation, which occurred on 6- weekends a year to counteract the threat of frost; and operation during the Christmas shutdown, for a total of 16 days, also due to the threat of frost. During all these operating periods the pumps were run at 100% speed, even during the frost susceptible periods, when intermittent operation would have been more appropriate.

Based upon these operating hours, Processautomation calculated that the total annual cost for operating the pumps on the cooling system was €117,000; this figure based on an energy cost of €0.09/KWh. On the basis of this figure Processautomation calculated that further significant energy saving could be achieved by the application of variable speed drives to the pump motors, in conjunction with a PLC-based process automation system.

The WEG CFW-09 132kW inverter drives selected for the motor control task are matched to the W22 motors, producing the optimum operating characteristics for high efficiency operation. A key feature in this respect is the CFW09's selftuning feature, which automatically matches the drive to the motor and load, relieving the user of the task of entering a motor map. The CFW-09 drives, plus a SSW-06 soft starter, were supplied by WEG distributor, Leclercq Energy, to Processautomation, who built them into a control cabinet, as part of its complete energy saving package, which also included a PLC, and process communications via Profibus-DP. Processautomation then installed and commissioned the integrated package.

The benefits of the installation were immediately apparent. Now, normal weekday operation between 3pm and 8pm requires the operation of just one pump, and this running at 70% of maximum speed, due to the variable speed control provided by the WEG CFW-09 drive. From 8pm to 11am, two pumps are in operation, running at 89.2% of maximum speed, also due to VSD control. At weekends and the Xmas shutdown, when frost could be a problem, two pumps are still required, operating at 89.2% of maximum speed. However, with the flexible control provided by the WEG VSD, the pumps are only required to run for 5-minutes in every 30-minutes, achieving substantial savings in energy. This contribution, plus the major savings from normal weekday operation mean that the total annual energy cost for operating the pump cooling system is now reduced to €72,000, based on an energy cost of €0.09/KWh. The resulting annual savings of €45,000 - or 38.5% - for ESB are a major contribution both to the company's bottom line and to the cost of the energy saving system itself, guaranteeing a fast ROI on the system outlay.

Motors & Drives
Saves €45,000 per annum
Share with
Print
Advertise with us
More products from this supplier