Infrared cameras from FLIR can measure temperature across an entire scene, capturing thermal readings for each pixel. By choosing the correct type for your application, you will be able to gather reliable measurements at high speeds 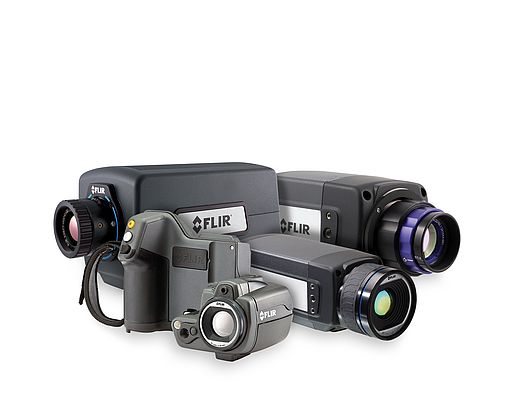 Cooled or uncooled, FLIR has a thermal camera for all needs 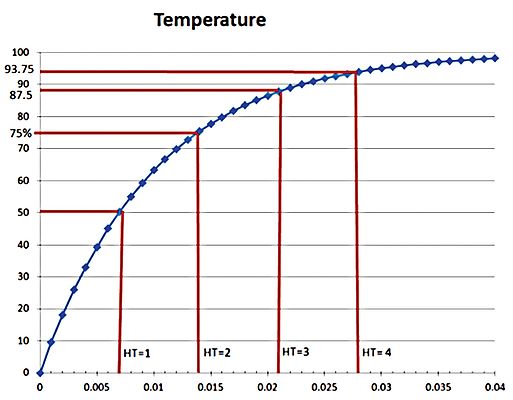 Measuring temperature across a broad area, instead of spot by spot, can help researchers and engineers make better-informed decisions about the systems they’re testing. Since thermocouples and thermistors require contact, they only provide data from one location at a time. In addition, small test subjects can only fit a few thermocouples at one time. Attaching them may actually change the temperature reading by acting as a heat sink. Non-contact measurement is possible with a pyrometer – also called an infrared (IR) thermometer—but just like thermocouples, pyrometers only measure a single point. Infrared cameras produce images from the radiation emitted by objects above absolute zero. By providing a temperature measurement for each pixel, researchers are able to see and measure temperature across a scene without contact. Because IR cameras offer more data than thermocouples or pyrometers and can track changes in temperatures over time, they work well for research and engineering purposes.

There are two types of infrared detectors: thermal and quantum. Thermal detectors such as microbolometers react to incident radiant energy which heats the pixels and creates a change in temperature that is reflected in a change in resistance. These cameras do not require cooling and cost less than quantum detector cameras. Cooled quantum detectors are made from Indium Antimonide (InSb), Indium Gallium Arsenide (InGaAs), or Strained Layer Superlattice. These detectors are photovoltaic, meaning photons strike the pixels and are converted into electrons that are stored in an integration capacitor. The pixel is electronically shuttered by opening or shorting the integration capacitor.

For an InSb camera such as the FLIR X6900sc, the typical integration times when measuring object between -20°C to 350°C can be as low as 0.48 μs. These incredibly short “snap-shot speeds” make it possible to freeze motion for images and to accurately measure very fast transients. In contast, the pixels of an uncooled camera such as the FLIR T1030sc are made from a material whose resistance changes significantly with temperature. Again, each pixel physically heats up or cools down. Its resistance varies with temperature and can be measured and mapped back to the target temperature via a calibration process. The snap-shot speed, or “time constant”, for a modern microbolometer camera is generally between 8-12 ms. However, this doesn’t mean the sensor’s pixels can be read out every 8 to 12 ms. The rule of thumb for a first order system responding to step input is it takes five time constants to reach a steady state.

TIME CONSTANTS AND A THOUGHT EXPERIMENT

Now let’s look at the difference between a quantum detector’s integration time and a microbolometer’s time constant in terms of measuring mechanical systems. Our first example is a printing process that was required to uniformly heat a sheet of paper across its width and length to 60°C. The paper spooled out of rollers at 50 inches/second. Both a cooled quantum detector camera and a microbolometer camera were used to capture side by side data. Figure 3 shows that the data from the two types of cameras looks dramatically different. The data from the microbolometer shows a big, relatively steady bump in temperature along the length. The data from the quantum detector camera shows significant variations in temperature over time. The variations indicate that the heated roller assembly cooled down due to contact with the paper over the first revolution. The bangbang controller sensed the temperature drop and turned the heater controller fully on again in response. As a result, the roller heated up until the set point was reached, shut off, and then the process repeated. This one graph was enough to convince the R&D engineer of two things – a photon counting camera was required for testing the product and that a PID control system must be implemented on the heated roller if the desired design objectives were to be met. For our second example, the goal was to freeze the motion of a tire rotating at 40 mph. As you would expect, the exposure time for the uncooled microbolometer camera wasn’t fast enough, causing the wheel spokes to appear almost transparent. (See Figure 4) Note how the fast integration time offered by the cooled camera stopped the motion of the wheel spokes, allowing for accurate measurement of the caliper as well as areas of corrosion on the rotor. In contrast, the spokes were moving too fast to be recorded by the uncooled camera. Any temperature measurements would be too low due to interference from the blurred spokes.

Besides snap-shot speed, quantum detector cameras have an additional advantage over microbolometers: they can offer a higher resolution and frame recording speed. For example, the FLIR X6900sc captures fullframe 640 x 512 imagery at a rate of 1000 frames per second. While many of the latest microbolometer cameras offer a similar 640 x 480resolution, the full resolution frame speed is only 30 fps. On the other hand, the fact that microbolometer cameras are uncooled means they can offer the ease of portability and handheld use. This can be an advantage for many applications. The X6900sc and similar cooled cameras are not inherently portable, but they include features such as the ability to synchronize and trigger remotely.

GET THE RIGHT TOOL FOR THE JOB

As you can see, it’s important to use the correct thermal detector for the job. Traditional forms of temperature measurement are not practical for moving or smaller devices and simply do not provide enough information to tell the full story of how products are responding thermally. IR cameras offer the ability to capture hundreds of thousands of points of accurate non-contact temperature measurement in every image, but it’s important to choose the correct detector for your application. If you choose a detector with an inherently slow response and then read it out at a high frame rate, you may end up with bad data. In general, microbolometers can be used for frame rates up to 50 fps. For tests with fast thermal transients or frame rate requirements, it’s usually best to select a higher performance cooled quantum detector camera.