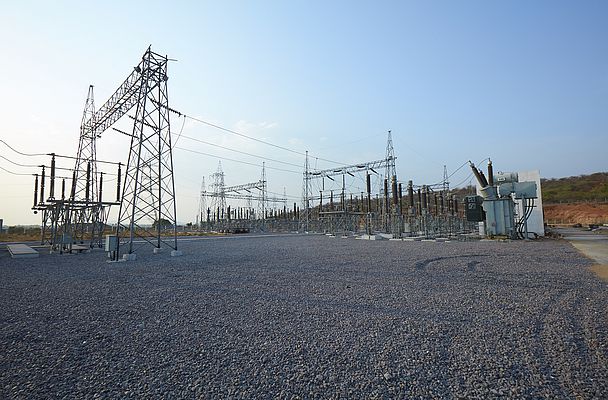 Years of severe drought have created a water crisis in the Mahbubnagar region in Telangana, a state in southern India where half the population of 35 million depends on agriculture to earn a living. The water table had virtually depleted and the monsoon rains now only last three to four months a year. The only option for providing adequate water for farming and drinking is to pump it from the Krishna River to a reservoir nearly 300 meters above. From there, through a gravity-driven “lift irrigation” system, the water can be channeled through nearly a hundred kilometers of canals to the parched farms and more than 300 villages that were at risk of turning to desert.

That 12-year-long project, the Mahatma Gandhi Kalwakurthy Lift Irrigation Scheme (MGKLIS), was recently completed. This was made possible only through considerable feats of civil engineering: industrial-strength water pumping technology and electric-power management systems that ABB, with decades of irrigation experience in India, provided. Now, the villages have a dependable supply of drinking water. Just as crucially, with the canals and a network of storage tanks irrigating about 137,000 hectares of land (an area nearly as large as the sprawling city of Los Angeles in California, U.S.A.), farmers who had retreated to cities in search of a livelihood, are now returning to cultivate the soil once again.

Pumping water at thousands of liters per second to reach a reservoir 298 meters above river level – the height of the Eiffel Tower – requires huge motors and high-voltage power systems. The MGKLIS project called for lifting the water in three separate stages, with ABB handling the critical middle stage – Lift II, with an 86-meter rise. The key features of the Lift II project were five 30-megawatt (MW), 11-kilovolt (kV) motors, each with a 23,000-liters-per-second pumping capability. They are the largest capacity and physically biggest motors used yet by ABB India in an irrigation project. Each motor has a footprint of more than 30 square meters. Powering these motors up to pumping speed from a dead start requires considerable amounts of electricity and potentially puts great strain on the mechanical systems and the local utility grid. ABB’s soft starter solution involves a 6 MW load commutated inverter (LCI) that minimizes the electrical surge, and variable frequency drives (VFDs) in the motors that enable them to start smoothly before accelerating up to 333 rpm.

ABB partnered with Andritz Pumps to provide this advanced pumping solution. For the project, ABB also offered substation equipment, transformers, and a digitally enabled supervisory control and data acquisition (SCADA) monitoring system that ensures a steady and reliable drawing of power from the grid and smooth pumping of water into the reservoir.

Now that China is slowly getting back to normal, normality looks like a faraway lighthouse for the rest of the world hit by the virus. Dark times are on the horizon for the manufacturing industry but a rebound with no major consequences is still possible
Read more

Due to the increasingly critical situation linked with the Covid-19 pandemic, Deutsche Messe was forced to cancel Hannover Messe 2020. The world's leading trade fair for industrial technology will come back next year from April 12 to 16
Read more

How the Gigafuse Helps Maximize Safety in Advanced Battery Systems

Electronics & Electricity
This whitepaper covers the ever-increasing demand for improved stored energy systems, the role of fuses and contactors, as well as faster and more precise next generation technology solutions for protecting EV batteries and power systems.
Read more

Automation
As automated guided vehicles, mobile platforms as well as autonomous carts and cobots become smaller, they are subject to stringent safety requirements. To address this issue, Sick designed a new safety laser scanner with minimized sizes, the nanoScan3
Read more
Advertise with us
Request information