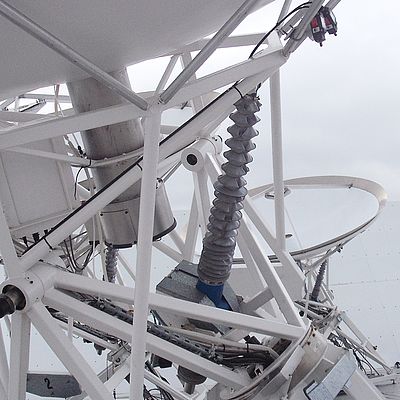 The Cavendish Laboratory based in West Cambridge, England, is part of the University of Cambridge’s School of Physical Sciences (Department of Physics) and has a world renowned history of discovery and innovation in physics. Linear motion specialist Power Jacks was selected by Cavendish Laboratory to engineer a solution to drive the elevation for The Arcminute Microkelvin Imager (AMI) antenna dishes.

The Arcminute Microkelvin Imager (AMI) is a twin-array radio telescope, spanning 13.5–18 GHz, operated by the Astrophysics group at the Cavendish Laboratory. The AMI is designed to find and visualise very faint cm-wave structures on scales 750mm (30'') - 3000mm (10’) on angular scales of 10 minutes of arc (1/6 of a degree) to 30 seconds of arc (1/120 of a degree) at a very fast surveying speed, and observe the Cosmic Microwave Background,   the left over radiation from the Big Bang. These observations tell us a great deal about how much matter content there is in the Universe and how the Universe evolved. The principal operation of the AMI is to carry out surveys for clusters of galaxies, to image these clusters in detail and to search for topological defects, which were created a tiny fraction of a second after the Big Bang.

Sited at the Mullard Radio Astronomy Observatory, Lords Bridge, near Cambridge, the twin-array radio is made up of a Small Array (SA), consisting of ten 3.7m diameter antennas and a Large Array (LA) consisting of eight 13m diameter antennas. Both arrays employ Fourier transform correlators each with a total bandwidth of 4.5 GHZ.

Power Jacks supplied ten 50kN metric ball screw jacks in translating screw configuration with a stroke of 1050mm. These ball screw jacks operate in normal UK outdoor conditions and allow the antenna to operate at wind speeds of up to 50mph. The ball screw jacks also allow the AMI to achieve a pointing accuracy of better than half a minute of arc (1/120 of a degree). The screw jacks are mounted on a special trunnion base at their gearbox and clevis end on the lead screw. The ball screw is protected from the elements by bellows boot and has a safety stop nut to protect from accidental over travel.

Cavendish Laboratory had previously used Power Jacks products when they provided the screw jack for the tilt mechanism on a 3m table for a Very Small Array (VSA) telescope which was operated successfully for eight years from the Mount Teide Observatory in Tenerife, the Canary Islands, Spain.

The metric ball screw jacks, on the AMI, have now been in operation for over five years and Cavendish Laboratory has been using Power Jacks products since 1999. Dr Keith Grainge, Project Manager for both the AMI and VSA telescopes says, “We are entirely satisfied with the quality of service and products supplied by Power Jacks”.

The Cavendish Laboratory has already published seven research papers on observations from AMI and work on the results from the main cluster surveys is well underway. The VSA telescope project has now finished, with its results on observations of the Cosmic Microwave Background published in a series of 21 papers.

Vision & Identification
Wimbledon can now play tennis in all weathers. 42 electric linear actuators have been installed to lock the new moving roof over the Centre Court in place
Read more

Motors & Drives
The inspection of the reactor cores is a key part of the maintenance program in a nuclear power station. Electric linear actuators lowered the inspection machine to engage with the reactor standpipes.
Read more
View all supplier's articles
Advertise with us
Related articles