Actually, it is not exactly easy to improve a good product. Sometimes it is the small details that make a profound difference. Georg Forster, certified engineer at Supfina Grieshaber from Wolfach in German Baden-Wuerttemberg, says he knows that fromprior experience as well. He is one of the 20 design engineers who develop and improve the systems used for surface treatment and the special Supfina 'superfinishing' process.'Customers appreciate our tailor-made solutions and the high quality of our systems', saysForster. 'For this reason, we focus on the durability and the superiority of the components during the construction stage already.' It is not least due to their high quality standards that Supfina opts for elements made by JAKOB Antriebstechnik. 'JAKOB offers us a vast portfolio of absolutely reliable clamping technology.

'JAKOB Antriebstechnik, based in Kleinwallstadt, has established itself as one of the leading manufacturers of servo and safety couplings. Mechanical clamping elements with internal force amplifying systems are part of their portfolio, too. When it comes to couplings, the company can profit from almost 40 years of well-founded know-how. After all, the company's founder Ludwig Jakob was not only the creative mind behind the concept of metal bellow couplings but a trail blazer for many other technical innovations as well. As a partner within the JAKOB GROUP, which unites seven companies located in the south of Germany under its umbrella, JAKOB Antriebstechnik can look back on a tradition of 20 years in mechanical clamping technology for tools and workpieces.

In Supfina's most recent new development, the superfinishing system 'Supfina 480', clamping elements are a vital part. Thanks to its innovative design, the system is absolutely perfect for honing cylindrical workpieces or tapered rolls. 'Using special stones, work pieces ranging from four to 200 millimetres in diameter can be treated', Forster explains. The challenge: in order to cover this wide range, adjustable elements have to be locked in place flexibly and quickly. For this reason, the engineers at Supfina have chosen the hydromechanical spring clamping cylinder 'ZSF' made by JAKOB Antriebstechnik. As many as twelve of these elements are used in the 'Supfina 480' system. Four elements hold a swivel panel in place, which carries the entire construction, and another four elements support each of two corresponding angle brackets. The brackets support cylinders which are aligned in an x-shape and transport the workpiece through the system as well as remove the residue from the honing process. 'The elements produced by JAKOB were our first choice, since the new version of the 'Supfina 480' system works fully automatic to a major extent. For this reason, ahydraulic power unit had already been included for other applications', Forster explains. Its sturdy construction, operational safety, and low acquisition and running costs make the ZSF cylinder an economic solution for a wide range of applications.

But how exactly do JAKOB's hydromechanical spring clamping cylinders work? As the name suggests, the cylinders work mechanically as well as hydraulically; to be more precise: they clamp mechanically and release hydraulically. This means that the draw piston is subjected alternatively to cup spring force or hydraulic pressure. A tie rod manufactured to the customer's specifications is inserted in the draw piston's tapped hole. The cup spring packet is compressed as the oil pressure increases which results in a rise of the spring force. Set pressure is only required during initial installation. In this case nominal clamping force is reached as a reaction force of the cup spring packet and the housing of the cylinder as well as the tie rod are aligned and locked in place by means of an adjustable ring guide nut. The amount of the pressure depends on the size of the ZSF cylinder and thus on the required nominal clamping force. JAKOB offers the cylinders in its standard programme for clamping forces from 16 kN (ZSF 1600) to 350 kN (ZSF 35000). As an example: ZSF 1600 requires a set pressure of 135 bars. Since the clamping force is maintained to its full extent independent of the oil pressure, this system ensures high operational safety even in case of power loss or leakage in the hydraulic system.

To release the tie rod, pressure is increased. The required pressure varies depending on the release stroke. The smallest standard cylinder ZSF 1600 allows for a stroke of up to 2.0 millimetres. In case of an application which requires a stroke of 0.5 millimetres a release pressure of 170 bars has to be applied. For the maximum stroke, pressure rises to 290 bars. Spring clamping cylinders are a good alternative when adjustable elements have to be aligned and locked in place temporarily. The hydromechanical spring pressure cylinders of the ZDF series work according to a very similar principle, by the way. They are available for vertical piston strokes and for forces of up to 250 kN. The ZDF systems can be considered to be the counterpart of the spring clamping cylinders equipped with a pressure piston instead of a draw piston. Customized solutions such as systems offering a larger stroke or non-standard sizes frequently allow optimizing the operational concept. To operate, a hydraulic power unit is needed - equipped with a manometer, a pressure cut-off valve, a solenoid valve and a pressure switch unit. If automatic clamping mode is not required, a manual piston pump equipped with a manometer is a low-cost alternative.

Thanks to the elements produced by JAKOB Antriebstechnik, machine operators can adjust the swivel panel of the superfinishing system 'Supfina 480' without any great effort. 'The preceding model - the 'Supfina 470' - still called for more manual operation', says Forster. Instead of hydromechanical spring clamping cylinders, regular screws were used. 'Unfortunately, some of the fixed points are located perfectly for initial installation but quite unfavourably for retrofitting.' This means that some screws were hard to reach with a wrench. 'The hydromechanical clamping cylinders allow us to release the connection by simply pressing a button.''In the end, a system is only as good as the sum of the components it uses', agrees engineer Georg Forster. 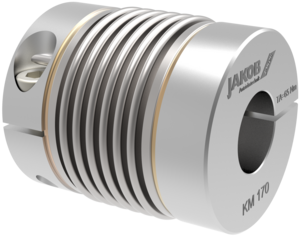 Stiff and flexible for a wide range of torques 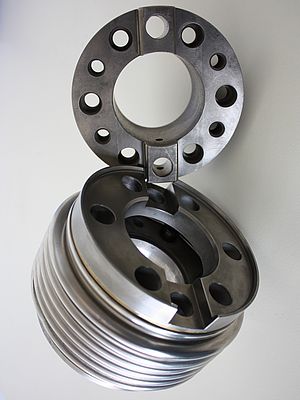