How to ensure the right quality for manufacturing companies 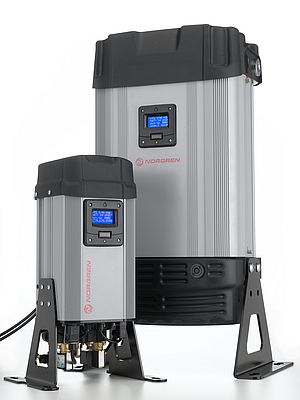 Compressed air is a safe and reliable power source that is widely used throughout industry. Sometimes known as the fourth utility, compressed air is used by approximately 90 per cent of all manufacturing companies in some aspect of their operations. However, unlike other utilities, compressed air is generated on site and its quality and cost are the responsibility of the user. This means the user needs to be aware of potential pitfalls that can affect the quality of air delivered, the major one being the presence of contaminants. In applications such as dental, medical, laboratory, automotive, electronics, telecommunications, pharmaceutical and laser cutting, compressed air purity is critical and contaminants in the air must be removed or reduced to acceptable levels. In the UK this is governed by ISO8573-1:2010 which specifies requirements for air dryness and purity.

Saturated air, water aerosols and liquid water within the compressed air system can cause corrosion to the storage and distribution system and damage to valves, cylinders, tools and production equipment. This results in increased maintenance costs and reduced production efficiency. Water in the compressed air can also cause damage to any products and packaging in direct contact with it.

As well as water, atmospheric air contains particles, typically between 140 and 150 million dirt particles in each cubic metre. Some 80 per cent of these particles are less than 2 microns in size and so are too small to be captured by the compressor intake filter, which is typically 25 microns, so they will travel unrestricted into the compressed air stream.

Atmospheric air can also typically contain up to 100 million micro-organisms - bacterial, viruses, fungi and spores - per cubic metre of air, which are drawn into the intake of the air compressor. The moist air environment of the compressed air system, particularly in the air receiver, is ideal for the growth of such microorganisms.

A further source of contamination from atmospheric air is oil in the form of hydrocarbons. Typical oil vapour concentrations can vary between 0.05mg and 0.5mg per cubic metre of ambient air. Once in the compressed air distribution system, oil vapours can cool and condense to form liquid oil. Both liquid and aerosolised oil mix with water in the system to form a thick, acidic condensate which causes damage not only in the compressed air system itself but to production equipment, products and packaging.

By the time the air is compressed, cooled and exits an oil-lubricated compressor, an additional four contaminants have been added. The contaminants added are liquid oil and aerosols, oil vapour from compressor oil, condensed liquid water and water aerosols. Finally, both the air receiver and the distribution system can add a further two contaminants in the form of rust and pipescale caused by warm, moist air in the system.

Purification technologies
The 10 contaminants outlined above need to be reduced or removed for efficient operation of a compressed air system and it takes a combination of different technologies to achieve this. Oil and particulates can be dealt with by filtration. Water vapour, however, will pass as easily as air itself through water separators and coalescing filters so needs to be removed by the use of a dryer.

The water vapour removal capability of a dryer is expressed as a Pressure Dewpoint or PDP. Dewpoint refers to the temperature at which condensation will occur, while PDP refers to the dewpoint of air above atmospheric pressure. High-efficiency compressed air dryers are used in critical applications where humidity levels, or PDPs, are specified to ISO 8573.1:2010. This standard specifies the purity of classes of compressed air with respect to particles, water and oil independent of the location in the compressed air system at which the air is specified or measured. It also identifies gaseous and microbiological contaminants.

In critical applications, refrigeration dryers are unsuitable since they cannot produce a dewpoint below freezing, having dewpoints of +3°C, +7°C or +10°C. In most critical applications, a PDP of -40°C is recommended because a PDP lower than -26°C will not only stop corrosion, it will also inhibit the growth of micro-organisms. Some applications like electronics require a dewpoint of -70°C. Refrigeration systems also usually use ozone-depleting CFC gases and can be expensive and bulky, as well as requiring specialist maintenance.

Meanwhile, membrane dryers are usually limited to low capacity applications and their purge air requirements are usually higher than desiccant dryers. Membrane life is limited, especially in stop-start applications, and a high level of inlet filtration is needed. They are also prone to chemical attack and can suffer catastrophic failure due to shock and vibration.

Adsorption dryers
With dewpoints of -20°C, -40°C or -70°C, adsorption dryers, usually employ the heatless pressure swing adsorption method, also known as PSA or more commonly referred to as heatless regeneration.
Adsorption is a process whereby specific molecules (the adsorbate) adhere to the surface of a highly porous solid (the adsorbent) by electrostatic and molecular forces. The adsorbent has a specific pore structure which will be a combination of larger or macro pores, slightly smaller or mesopores, or very small pores known as micro-pores. The adsorbent is normally made into granules or beads with a clay binder to form packed beds through which the adsorbate is passed and the process of adsorption can take place.

To continuously supply dry air, an adsorption dryer must regenerate the desiccant material. The simplest way to achieve this is to pass clean, dry and expanded air, known as purge air, over the wet adsorbent material. To enable this process, PSAs are designed with two vessels, so that while one is on-line drying the compressed air, another is off-line undergoing regeneration. Although using the same principles, there are two types of design of PSAs, twin tower and modular, and the differences in their design can substantially affect their performance and cost-effectiveness.

Twin tower PSAs consist of a pair of pressure vessels and installation may require extensive pipework and plant modification as well as inlet and outlet filtration. They also require a large volume of desiccant which can lead to high operational and maintenance costs. The fill method used on twin tower designs can lead to inconsistencies in drying, desiccant regeneration and dewpoint while, over time, desiccant attrition reduces the adsorption capacity of the dryer and leads to blocked outlet filters and frequent servicing. Being based on pressure vessels, they also fall under the requirements of the Pressure Equipment Directive (PED) for annual inspection and certification. While their design is simple, traditional desiccant dryers can also suffer from purge air losses of up to 25 per cent.

Modular PSAs use a replaceable desiccant cartridge, rather than pressure vessels, in a heatless twin-chamber configuration contained within a housing. Wet air from the compressor after-cooler enters the dryer and is directed into one chamber. Water and particulates are removed by the filtration stage and water is retained within the dryer until the column is regenerated, when it will be vented to atmosphere as it is depressurised. Following the filtration stage, air passes through the desiccant bed where any remaining moisture is adsorbed. Finally the dry air passes through a particle filter, which retains any remaining desiccant particles that may have been carried through the system. At the same time, a small amount of dry air is counter-flowed down through the second chamber and exhausted to atmosphere, removing moisture and regenerating the desiccant. Electronic controls periodically reverse the function of each column to ensure a continuous supply of dry air.

Playing It Safe With Compressed Air

Pneumatic Cylinder Handles the Pressure in Keg Cleaning and Filling

Pneumatic Cylinder Handles the Pressure in Keg Cleaning and Filling

Hydraulics & Pneumatics
With over 200,000 attendees, K 2019 unveiled the latest innovations and offerings from the plastics sector
Read more

Moog and Voith in Talks to Establish a Joint Venture

Hydraulics & Pneumatics
Riko Level Switches are compact and simple in design. They have proven their high reliability in a wide range of applications. Many more types are available.
Read more

Regulators to maintain the desired temperature

Hydraulics & Pneumatics
A controlled temperature and humidity environment inside the enclosure can be attained using Fandis regulators: mechanical thermostats and hygrostats to extend the service life of your components
Read more

How to Protect Mining Machines

Steel your Plant against Inefficiencies and Downtime