It allows safe usage in some of the most dangerous environments 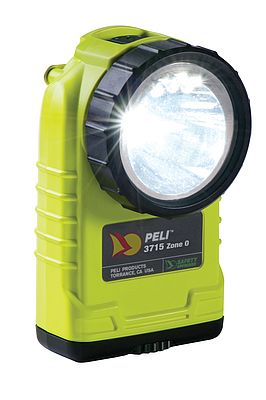 Peli Products has introduced the 3715Z0 LED light. Being certified to ATEX Cat. 1 (Zone 0), this lightweight and tough lighting tool was designed for the worst case scenario and allows safe usage in some of the most dangerous environments. Featuring the all new downcast lighting mode which incorporates 3x 5mm LEDs (32 lumens) to safely light the way, the 3715Z0 LED will help first responders find their way through dark and smoky situations. When used in downcast only mode, it enables them to read/write documents and reports as well as converse without blinding fellow responders.

However it's next generation main LED generates up to 174 lumens.The 3715Z0 LED offers four light modes - high (174 lumens), low (95 lumens), downcast (32 lumens) and signaling (142 lumens). Powered by 4 AA batteries (sold separately), its run time is 4 hours, 45 minutes on high with 8 hours, 30 minutes on low, 10 hours on signaling and 31 hours in downcast mode. Other first-responder-friendly features include a four-level battery life indicator (with blue LEDs built into the switch), a tethered battery door so it won't be lost in the field, an IPX4 water resistance rating and a stainless steel mounting clip with split ring.

Constructed of nearly indestructible polymer, this light has been rated for a drop test of 2 meters. The 3715Z0 LED is available in safety yellow and includes a black lens shroud. A photoluminescent lens shroud, that gathers ambient light and will glow in the dark for up to 30 minutes, can be purchased separately. Additionally, the 3715Z0 LED comes with Peli's Legendary Guarantee of Excellence.

Adapted Packaging for the Safe Delivery of COVID-19 Vaccines

Air Cases for the Safety of Fragile Equipments

Industrial Equipment & Supplies
Peli Air cases are the first in a series of remarkable innovations. For over 40 years Peli has designed and crafted the most influential protective cases in the world, and the company is just getting started
Read more

Industrial Equipment & Supplies
Peli's Protector Cases get your gear from point A to point B in the condition it's meant to be in: intact and functional. For more than 30 years Peli has built a reputation for manufacturing the toughest Protector Cases in the world.
Read more

Industrial Equipment & Supplies
Innovated and tough, and trusted by hard workers for more than 30 years
Read more
Advertise with us
Related articles