At the yearly show preview, the lineup and major topics of Hannover Messe 2020 were rolled-out and illustrated. This year's edition will focus on 4 megatrends: digitalization, individualization, climate protection, and demographic change 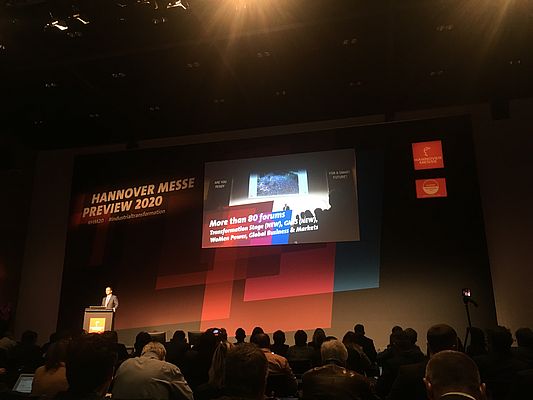 Digitalization, individualization, climate protection, and demographic change. At the show preview that took place in Hannover on Wednesday 12 February, Hannover Messe presented to more than 150 international trade journalists and 8.800 online participants the exhibition’s lineup and the four megatrends for this year’s edition.

Another rich and highly innovative edition of the world’s leading industrial technology show, which will open its doors in Hannover on April 20, is therefore expected.

Register here to get your free ticket to Hannover Messe 2020.

''Hannover Messe will open our eyes to the opportunities and potential arising from innovative technologies, with the growing awareness of climate protection. We all can see that four megatrends are transforming the way we live, the way we work and the way we manufacture. First digitalization: companies that want to remain competitive must embrace technologies such as AI, data analytics, IoT, data security. As a result, production and sales become faster and more efficient,'' explained Dr. Jochen Koeckler, Chairman of the Managing Board at Deutsche Messe.

For Dr. Koeckler, data is a fundamental commodity that enables new business models and customer relationships. ''Five years ago, we couldn’t believe that digitalization would become such an important topic for all of us,'' he added.

Individualization translates into the growing desire for customization, as a result of a highly developed society that demands unique and not only standard products. ''The goal is to try to do this in a profitable way,'' stated Dr. Koeckler.

The third megatrend, climate protection, imposes on industry to accept its responsibility for climate change. The efforts to decarbonize the production and reach carbon neutrality are growing exponentially and climate-friendly production will be more and more a competitive advantage.

The demographic change, with the baby boom expected in the next 10 years, requires new solutions. Automation and IT will be part of the answers to tackle future demographic challenges.

AI and data analytics, 5G, production and logistics, and CO2 neutral production will be among the major topics showed at the unique and innovative platform of Hannover Messe. Being the key drivers of the industrial transformation, data will continue to have a central role in the development of the factory of the future, while 5G will demonstrate the potential of real-time data transfer, no matter how large the volume of data is, guaranteeing high standards in terms of security. ''5G is absolutely fundamental to the digital integration of industry. So, in hall 3 and 21, we are setting up a real, working 5G network,'' unveiled Dr. Koeckler.

For climate protection, energy efficiency and process optimization stay on the industry agenda. The objective is to create sustainable and carbon-neutral industrial policies.

Digitalization will be a major driver for intralogistics, especially to raise the number of automated warehouses.

At the forefront of innovation, we find Indonesia. The first largest Islamic democracy in the world with a fast-growing economy is the official partner country for this year’s Hannover Messe. Empowered by the mission statement “Making Indonesia 4.0’’, Indonesia sets clearly its national strategy and the ambitious target of actively contributing to the Fourth Industrial Revolution being listed among the 10 biggest economies by 2030.  Indonesia will be at Hannover Messe with more than 170 exhibitors ''to showcase our commitment to innovation and our startups,’’ said Arif Havas Oegroseno, Ambassador of the Republic of Indonesia to the Federal Republic of Germany.

The power of startups

Alongside big tech companies, nearly 250 innovative startups with disruptive ideas will be exhibiting at Hannover Messe, to show how digitalization is empowering small companies to play a fundamental role in the industrial revolution. In the Future Hub area (hall 24-25), Hannover Messe gives a chance to young tech enterprises to showcase their pioneering innovations which are shaking up the industrial sector.

Register here to get your free ticket to Hannover Messe 2020.