The Rising Prominence of Smart Automation in Warehouses

With the booming of e-commerce, finding alternative solutions to guarantee more efficient and quick operations in warehouses has become a must. Smart automation based on robotics, edge computing, and AI looks like an ideal solution

Smart automation in warehouses is a market that is worth more than 30 billion dollars by 2026 (source: LogisticsIQ). If we think that in the world, today, we can count nearly 200 billion dollars of pallet movements, of which just 5% are happening in automated warehouses, it is easy to understand the opportunities lying here.

Covid-19 has even accelerated the transition to smart logistics. The forecasts say that the market, which is relatively small now, will grow 100% every year in the next five years, driven by the booming of e-commerce everywhere. Social distancing, lockdown measures, and the growing need for new workforce to keep up with the high number of orders have imposed a shift in the way logistics is conceived and managed. Six million people are currently employed in warehouses, and most of the tasks are still conducted manually, often in difficult and physically challenging conditions.
Therefore, companies have realized the centrality of logistics for their business models, and automated warehouses have become a trend, especially in Japan, Europe, and the USA.

Who wants to work in warehouses?

In China, the aging population and the lack of young workforce, – caused by the very low birth rate, despite the easing of the one-child policy, and the unattractiveness of low qualified, manual jobs – have posed significant challenges to warehouse managers. They had to confront the reality of reduced labor availability in a booming sector that imposes tight rhythms to workers, especially during weekends, holiday seasons, and Black Fridays. Implementing alternative solutions to solve these growing challenges is not a plan B anymore, but it is part of the survival and expansion strategy in the retail and e-commerce sector. As we have experienced during the first months of the pandemic, the supply chain sector is also concerned.

For the Chinese company Geek+, warehouse automation is one of the most promising solutions to the logistics market's rising needs. Co-founded by four engineers or ‘’geeks’’ in 2015, the company made a small idea – using AI systems and algorithms to create smart robot carriers – into a global business. Today, Geek+ has nearly 800 employees worldwide and offices in China, Europe, America, and the Asia-Pacific region. ‘’We believe that technology does no steal jobs from humans, but it rather enables people’s job. This is our philosophy and what has driven our work during these five years,’’ said Hong Yu, Chief Marketing Officer at Geek+. He also explained the genesis of the company’s name as the idea of four ‘’geeks’’ boosted by the ‘’plus’’ of connecting technology with human lives to create higher quality and standards.

Geek+’s technology for warehouses automation is based on edge computing, robotics, and AI. It consists of three components: the hardware controlled by a system, the software, and a brain similar to a human brain. The automation happens smartly, meaning that the robots are controlled and trained using AI, algorithms, and big data. ‘’As it happens for a human brain, the robot intelligence is trained by different scenarios and grows like a baby to a young man and then an adult. Edge computing is embedded in every robot to enable the detection of the environment and the transmission of feedback to the brain. Therefore, the intelligence is located at the edge and central brain level, where a constant exchange of information and data happens.

''With this kind of technology, people don’t have to perform exhausting and dangerous tasks anymore, such as covering long distances to pick all goods,’’ Hong Yu stated.

Robots do it better

But how can such technology quickly adapt to different environments? Hong Yu illustrated that calibration is carried out in three steps, which can take from one to three months, depending on the site's dimension and complexity. The first step requires opening the conversation with the warehouse manager to understand the business strategy and the output requirement. Then it comes the site investigation to assess the workflow and put together an appropriate solution proposal. After that, a small test is run and, if it is successful, the launch phase starts.

Geek+ has recently released a whitepaper to show how they implemented their smart logistics solution in the Chinese warehouse of Decathlon, one of the world's biggest sporting goods retailers. The use case highlighted a significant improvement in the efficiency and flexibility of operations and a tripling of teammates' average productivity. Inventory capacity was also increased by 40%. ‘’Robots are able to provide better performance than humans, especially in picking tasks. A machine can easily drop and carry 500 kg pallets in a picking station,’’ said Hong Yo. However, the collaboration between humans and machines does not limit to picking and other manual labor tasks. In an automated site, warehouse managers can regularly check the workflow in big dashboards and monitors.

Smart automation in warehouses is just at the beginning of its journey and is in constant evolution. To refine its technology and expand its presence in key industries such as retail and smart factory, Geek+ looks at optimizing its picking technology – especially for small items – and strengthening some strategic partnerships. This would help set up the basis for an IT infrastructure that makes integrated communication among the robots, the server, and the software system within the warehouse possible.

In this fast-changing scenario, we wonder what warehouses will look like in five to ten years… 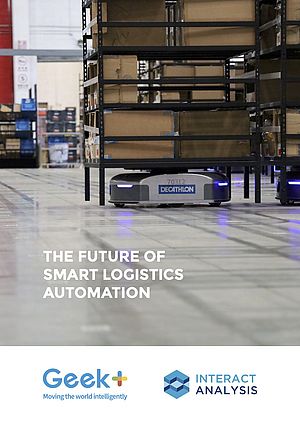 The Future of Smart Logistics in Automation

Geek+ and Decathlon started a cooperation for warehouses optimization