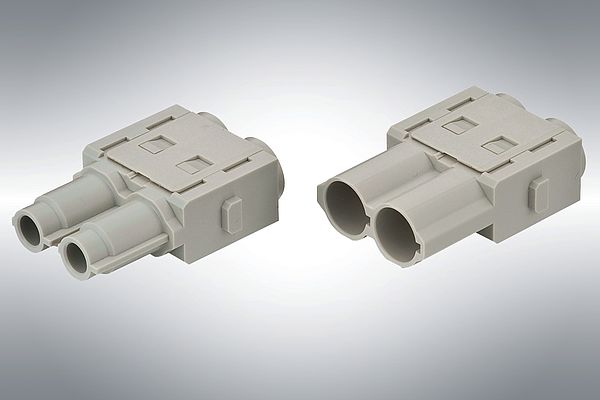 Predestined for applications presenting the toughest mechanical demands, the Han 70 A crimp module is available for the Han-Modular series from the HARTING Technology Group. It is plug compatible with the Han70 A axial screw module already used in many applications. The transmission of a great deal of power in the most compact space is one special feature. For example, this allows up to 12 power contacts with 70 A and 1000 V to be implemented in a pluggable version in a Han 24 B connector. Working with voltages up to 1000 V, the crimp module supports two contacts per module and up to six modules per connector. Its conductor cross-section is from 10 to 25 mm². Contacts can be removed without tools and on hand crimp technology as well as crimping tools can be used. As an open connector system, the Han-Modular series is especially flexible and allows adaptation to users' individual requirements. Consequently, users can put together "their" connectors to satisfy the required configuration. In order to increase the number of possible configurations, new additions are continually joining the current 36 modules for electrical, optical and gaseous signals.

Electronics & Electricity, Energy Efficiency
Connectors can significantly increase the modularity of wind turbines, reducing the monetary and personnel costs accrued during installation and operation, and therefore also the economic impact of the power plant
Read more

Europe VS Asia: Challenge or Opportunity?

Electronics & Electricity, Industry 4.0
IEN Europe and IEN D-A-CH met Philip Harting, Board Chairman of HARTING Technologie Gruppe. With his extended experience in the Asian market, Mr. Harting gives us his point of view regarding the opportunities that lay behind the investments in the Far Eas
Read more