With Intel Core processors of the third generation 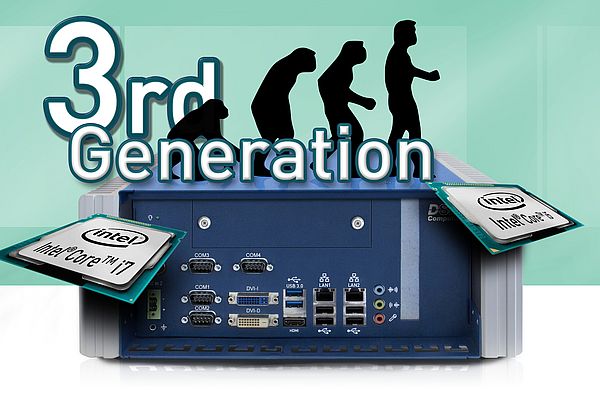 DSM Computer has extended its A1 Embedded PC family with two higher-performance models with Intel Core processors of the third generation. The new systems integrate the Intel Core i7-3610QE processor with four CPU cores and 6 MB cache or i5-3610ME processor with two cores and 3 MB cache. Both processors can run at a maximum turbo clock frequency of 3.30 GHz. Another performance improvement was achieved with the integrated Intel HD Graphics 4000 graphical controller that is significantly faster than the graphic chip integrated in the Intel Core processors of the second generation. Despite the extremely high computing, graphical and video performance, the industrial computers are installed in a completely closed housing. Thanks to the hybrid-cooling concept, the system avoids the need for air exchange from the exterior to the interior of the device. To ensure the optimum cooling, two heat pipes conduct the heat generated by the processor directly to two large heat sinks on the exterior of the device. The internal fan guarantees the optimum heat transmission to the internal wall of the housing and so prevents hot spots. The robust computers are specified for 0° to 45° C ambient temperature and designed for operation in dusty environments.

Automation
Based on the Intel Atom processor Z510
Read more