Hella Celebrates the Opening of its New Lithuanian Plant

The lighting and electronics specialist has opened a new plant in Lithuania, Kaunas region. This way, the company will be able to serve the rising demand for electronics components on the European market 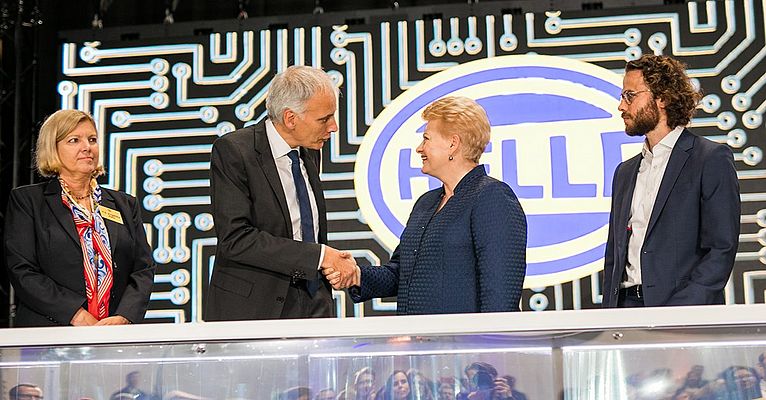 Hella Celebrates the Opening of its New Lithuanian Plant

Hella has celebrated today the opening of its new plant in Kaunas region, Lithuania. Through this strategic manufacturing site, German lighting and electronics specialist wants to serve the rising demand for electronics components on the European market.

Lighting electronic components will be the first production focus followed by various sensors, actuators and control units. The number of employees, now around 70 workers, is expected to be increased to 250. The overall investment volume until the finalization of this expansion phase will be in the mid double-digit million euro figures.

“Hella has been growing stronger than the market for years,” said Hella Ceo Dr. Rolf Breidenbach during the plant opening ceremony. “A crucial reason for this consists in our consequent positioning along the major market trends: autonomous driving, energy efficiency and electrification, digitalization as well as individualization. With its new plant in Lithuania, we are creating an important prerequisite for meeting the rising demand for our innovative product solutions while continuing our profitable growth path.”

The plant in Lithuania is already the fourteenth electronics plant in the global Hella network. In particular the well-developed infrastructure and great availability of qualified workers resulted in the decision in favor of the Lithuanian Kaunas location. After a construction period lasting a little less than a year, Hella was thus recently able to start series production across some 7,000 square meters of production space. In his address, Dr. Breidenbach thanked all involved persons: “The reason we could realize the location in such a short time not only speaks in favor of the great commitment of the Hella team here in Lithuania as well as of the colleagues worldwide. It also demonstrates the outstanding cooperation with our local Lithuanian partners.”

“Despite foreign experts being skeptical about Lithuania’s vision to attract FDI projects from automotive components manufacturers, HELLA became the first serious player that came here and now stands as proof of Lithuania’s capabilities. After HELLA’s decision was announced, many more international companies joined the cluster. Today, the rapid growth and confidence in the industry pave the path for Lithuanian companies not just to supply HELLA with the required materials, but also to talk directly with German engineering and automotive companies,” Virginijus Sinkevičius, Lithuania’s Minister of Economy, says.

Special guests at the opening ceremony

Many high-profile industry and political guests attended the new location’s opening ceremony, amongst them the President of the Lithuanian Republic, Dalia Grybauskaitė.  Also, the German ambassador to Lithuania, Angelika Viets, the Lithuanian Vice Minister of Economy, Dr. Marius Skuodis as well as the General Manager of Invest Lithuania, Mantas Katinas, attended the plant opening.

Electronics & Electricity, Test & Measurement
The new Indigo510 is the latest addition to Vaisala’s Indigo transmitter family, all of which are compatible with Vaisala’s industry-leading Indigo measurement probes. The Indigo510 builds on the same modular platform and includes the same metal casing, software, and display as the flagship Vaisala Indigo520 Transmitter. Indigo510 is available also without a display. The Vaisala Indigo510 Transmitter...
Read more

Yokogawa Invests in CyberneX, Developer of a Technology for Measuring Brainwaves with a High-performance Earphone-type Device