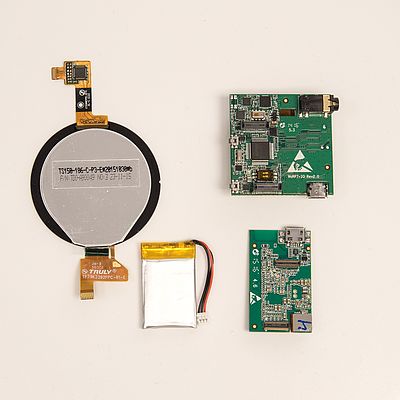 Farnell element14 has introduced an integrated colour display module with touch interface, along with the Android SDK (software development kit), for the WaRP7 development platform, which targets IoT and wearable applications.

The WaRP7 LCD module incorporates a standard MIPI display with DSI (display serial interface) and I2C (inter-integrated circuit) interfaces, and is designed specifically for use with WaRP7 products. The screen is round and has an active area diameter of 31.9 mm with 320 RGB × 320 dots resolution and a power consumption of 226 mW.

Speed and ease the development of IoT

The WaRP7 is designed to speed and ease the development of IoT and wearable devices by addressing technology challenges and freeing developers to focus on creating differentiated features. The platform consists of a main board and a daughter card. The main board is based on the NXP® i.MX 7Solo application processor, and features an advanced implementation of the ARM® Cortex®-A7 core as well as the Cortex-M4 core.

The unique heterogeneous multicore architecture of the WaRP7 not only enables low-power modes critical for most designs, but also provides the power to drive a higher level operating system and a rich user interface. The daughter card is based on a flexible design with sensors collecting a range of data and the MikroBus™ expansion socket accessing over 200 Click Boards™ for users, allowing rapid prototyping across all potential IoT and wearable ideas. All components included in the system are selected for their low power consumption, small form factor and minimum cost.

The system now includes full-featured Android and Linux operating systems, which greatly increases the available range of programming options and allows the realisation of the Android SDK (software development kit).

Electronics & Electricity, Test & Measurement
The new Indigo510 is the latest addition to Vaisala’s Indigo transmitter family, all of which are compatible with Vaisala’s industry-leading Indigo measurement probes. The Indigo510 builds on the same modular platform and includes the same metal casing, software, and display as the flagship Vaisala Indigo520 Transmitter. Indigo510 is available also without a display. The Vaisala Indigo510 Transmitter...
Read more

Yokogawa Invests in CyberneX, Developer of a Technology for Measuring Brainwaves with a High-performance Earphone-type Device