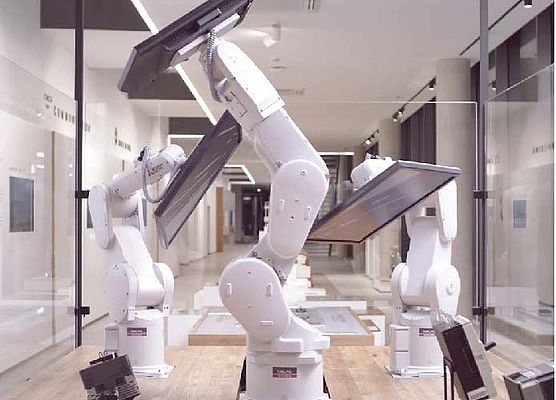 Mitsubishi Electric’s interactive robotic installation known as “Threebots” has been awarded the coveted Silver Lion award at the 64th Cannes Lions International Festival of Creativity in June 2017. “Threebots” has already received several awards since its installation at the German branch in Ratingen. In November 2016 Mitsubishi Electric was honoured with the “Red Dot: Grand Prix” award for its outstanding robot application. The Lion is recognised globally as the benchmark for creative excellence in communications and is the most coveted and respected award in the advertising and creative communications industry. “Threebots” won over the international jury with its interactive concept. The continuous, perfectly coordinated routine featured simultaneous animations on the monitors, technically challenging choreography and effortless motion.