The RemoveDEBRIS satellite from the RemoveDEBRIS project is a small satellite mission made by a European consortium, the universities of Surrey and Stellenbosch, and co-funded by the European Commission. Its goal is to test four Active Debris Removal experiments in order to face the increasing challenge of space junk, estimated at more than 7,600 tonnes and approaching speeds of 30,000 miles per hour.

For this third time, after capturing a simulated piece of debris and identify space junk with camera based vision navigation system, the satellite used an Airbus Stevenage designed harpoon that featured a 1.5 meter boom deployed, fired at 20 meters/sec with a piece of satellite panel on the end. The three first attempts were successful so that the team is now preparing for the final experiment in March with a new mission consisting in inflating a sail that will drag the satellite into Earth’s atmosphere in order to be destroyed. 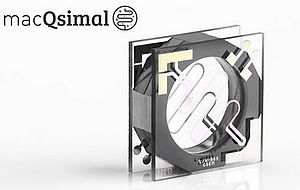 Use quantum effects in atomic vapors