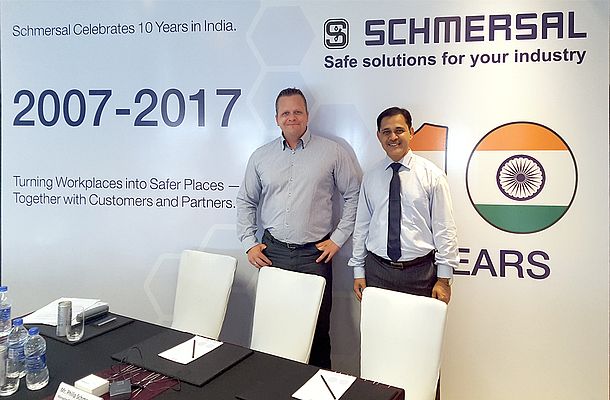 Schmersal India Private Limited, a subsidiary of the Schmersal Group, celebrates ten years of existence this year. Some 200 guests from politics and business joined the celebrations on 2 June 2017 in Ranjangaon, including German Consul General Dr. Jürgen Morhard.

Brief history of the company

The company was initially founded in 2007 as a sales organisation in order to participate in the growing Indian market for machine safety. In 2012, the cornerstone for a production factory was laid in Ranjangaon near Pune in the state of Maharashtra. The Schmersal Group invested about 8 million euros (approx. 580 million Indian rupees) in the construction of the new factory, which started production in July 2013.

“The constant rise in demand for Schmersal products was the main factor behind the decision to invest in our own factory, especially as it became apparent that the Indian market offers massive potential for the years to come,” reports Sagar Bhosale, Managing Director of the Indian subsidiary. “To date, Schmersal is the only company producing safety switches directly in India.”