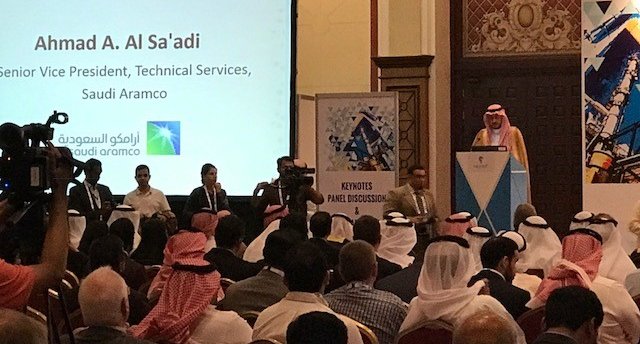 It’s October, the weather is (as usual) hot and humid in Bahrain, though at 5am it’s just dawn and refreshing enough to take an early am jog past the Mosque and along the water. (No traffic at that hour). For the fourth time in eight years, leading operators, technology providers, and software suppliers, gather to talk process engineering innovation, adoption and best practices, at the biennial MEPEC conference.

The fourth Middle East Process Engineering conference got underway in Bahrain, with about 1800 total attendees registered. About 300 attended the opening plenary session. Many people may have felt that the opening by the Bahraini Minister of Oil and several senior Saudi industry executives would be all fluff, and stayed away. They missed out. In reality, the speech, in particular, the one provided by Saudi Aramco’s Ahmad A. Al-Sa’adi, Senior Vice President of technical services, was substantive, thought provoking, and sends a clear message across the Gulf region and to international organizations represented there.

Saudi Aramco, a company with very substantial energy assets, world class process facilities across the supply chain (from well to petrochemical plant and gas station), and formidable financial resources, is laying out a roadmap that they feel will position them for sustainable long-term growth through innovation.

Al-Sa’adi laid out an interesting Aramco company strategy, backed that up with a few noteworthy statistics, and mentioned a few highlights, with metrics, of results to date.

For those outside the region, who feel that the Saudi Oil “game” is simply to consider different strategies related to oil production rates and oil prices, you have very seriously over-simplified the business and economic forces at work, have failed to consider the ambitions, intellectual capital and resolve to succeed at work, and are missing some interesting and important trends related to the accomplishments to date of Saudi Aramco, and other regional oil and petrochemical players, and their future vision.

From the first time I was invited to visit the Saudi Aramco central visualization center, or “command center”, in Dahram, Kingdom of Saudi Arabia, on a visit six years ago, I have felt that Saudi Aramco has a much stronger vision of where technology can take them as an organization than people realize, and a very clear idea of how to make the best uses of any resources and money spent to adopt and employ technology in the service of their energy business.
This was made clearer in Al Sa’adi’s brief remarks, which while understandably brief and detail-free, yet were laced with enough specific examples to make clear the practicality and achievability of Saudi Aramco’s goals.

In support of Al Sa’adi’s discussion of Aramco as a technology leader, he threw out to the audience a few nuggets. Aramco is now funding three worldwide R&D centers, in Cambridge, MA, USA, in England, and in China.  These R&D activities have yielded some 450 patents in the past year.  Quite beyond that, Saudi Aramco has funded 25 startup technology ventures, and recently acquired one such technology, a chemical product line called Converge, which converts waste CO2 (a greenhouse gas) into polyol.  As part of this discussion Al Sa’adi also mentioned Saudi Aramco’s lighthouse program to drastically reduce its gas flaring in its production fields to one of the lowest in the upstream industry.

Saudi Aramco is also pursuing disruptive digital technologies that can help greatly improve profitability.  Saudi Aramco is citing an early success in use of data analytics in their processes that he states have reduced maintenance costs by 10%.
Also, he mentioned the application of advanced process control (APC) with the goal of achieving upstream production cost savings of 23%.

Saudi Aramco is investing heavily in new methodologies, in both the project management area and in the cost estimating area, to greatly improve capital efficiency. Areas mentioned by Al Sa’adi included the kinds of project execution systems, and “front end loading” approaches previously championed by the US-based EPCs that have been employed for the megaprojects in the region, and by Saudi Aramco’s close partner, Dow Chemical Company. Al Sa’adi also mentioned an emphasis on value assurance and a constant monitoring and evaluation of world market conditions.

Finally, Al Sa’adi mentioned Saudi’s very strong focus on operational excellence. One of the technologies employed here has been AspenTech’s Fidelis reliability, used to select operational excellence targets for improvement.
This thought-provoking speech, and call to action to his fellow Middle East operating companies, was all presented in front of the backdrop of a large MEPEC banner proclaiming the themes of the conference in 2017 to be "Innovation" and "Sustainable Growth".

Certainly a strong, and credible statement, that Saudi Aramco has a vision and pathway to employ technology leadership and innovation to stay at the front of the global conversation in the energy economy and process industries.  I found myself feeling inspired that AspenTech continues to play a key role as a supplier of many of the key software technologies that are being employed by ARAMCO in this journey. And, this speech alone, delivered in a low key and modest way, was for me worth the 14-hour trip from Boston to Bahrain.