Useful for electrical and maintenance inspections 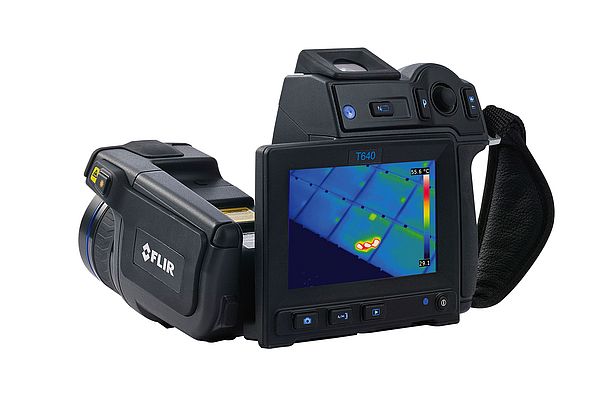 The Flir T620/T640 thermal imaging cameras were are designed for the expert requiring high performance and the latest technology available. For users that do not need the high image quality of 640 x 480 pixels that the T620 and T640 are offering, but want to enjoy most of the features that they have to offer, Flir Systems now introduces the Flir T600. Just like the T620/T640, the T600 comes with a tiltable optical unit, which makes it possible to measure and take images of objects in all angles, still in a comfortable working position.

It produces thermal images of 480 x 360 pixels. The measurement range lies between -40˚ C and +650˚C. The T600 also incorporates a 5 megapixel visual camera. It generates crisp visual images that can be used as a reference against the thermal image in all conditions. Thermal images and visual images are stored simultaneously when pushing a button. A LED lamp allows for taking visual images also in extremely dark environments.

The T600 comes with a large number of features that are extremely useful for electrical and maintenance inspections.

- Picture-in-Picture: a function for overlying the thermal image on the visual image
- Thermal Fusion: merges visual and thermal images for better analysis
- Text and voice annotations
- Fast autofocus
- Sketch annotations: touch the screen to add sketch annotations
- MeterLink: allows to transfer the data acquired by an Extech clampmeter wirelessly to the Flir T600
- Instant reports: allows for creating reports directly inside the camera
- WiFi interface: allows to wirelessly send images to a PC, tablet PC or smartphone as well as remote control of the camera

The T620/ T640 produce thermal images of 640 x 480 pixels. The thermal imaging cameras incorporate all features of the FLIR T600, but are offering new innovative features as well.

GPS
The T620/T640 incorporate a GPS function that allows to georeference thermal images to determine their geographic location. From now on, the exact location of possible anomalies can be determined easily.

Instant Report
An 'instant report' of the inspection (with sketches or other text comments included) can be created directly in the cameras. A programmable button provides easy access to favorite functions.

Image sketch
Allows to clearly indicate on a saved image the location of the problem area both on the thermal and the visual image. This can be done immediately on the touch screen of the camera. The indications you make will automatically appear in the report.

Multi Spectral Dynamic Imaging (MSX)
The T640 thermal imaging camera is equipped with the innovative 'Multi Spectral Dynamic Imaging´ (MSX)feature, which produces an extremely detail rich image. MSX produces better texture in a thermal image. Due to this new feature more anomalies can be detected, more detailed analysis can be done and conclusions can be drawn in a split second.

Software included
Every T600-Series thermal imaging camera comes with Flir Tools software. The software allows to import thermal images directly from the T600-Series to a PC for basic reporting and analysis of your findings.

• Import images from the thermal imaging camera to a PC
• Lay out, move and resize measurement tools on any thermal image
• Create PDF imagesheets of specific images
• Add headers, footers, and logos to reports
• Apply filters when searching for images

Users that need more reporting functionalities can choose Flir Reporter software which is also compatible with the new Flir T600-Series.

A Beating Heart to Take the Pulse of Measurement. Safely

Test & Measurement
The so called ''Heartbeat Technology’’ from the Swiss group Endress+Hauser is the summa of the best diagnostics solutions in the company’s product portfolio. Nikolaus Krüger, Chief Sales Officer of the Endress+Hauser Group, explains why
Read more
Request information