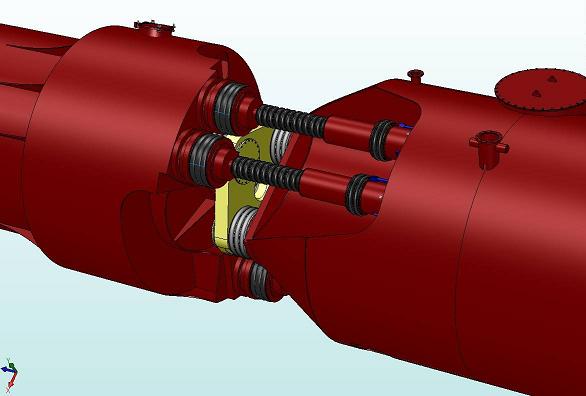 Working closely with engineers from Pelamis wave power, Schaeffler’s bearing specialists have enabled a major breakthrough in the design of the next generation of renewable wave energy converters.  By pushing the boundaries of bearing and seal technology and by thinking ‘outside the box’, a new renewable energy solution has been made possible by the cooperation of two companies both keen to leave a long term legacy of clean energy.

For more than 10 years, engineers at Pelamis Wave Power have been developing a renewable energy solution that offers both commercial viability and low environmental impact.  With a company ethos of innovation, constant research and development and a readiness to question and challenge existing technological thinking, Pelamis has succeeded in overcoming the quite incredible engineering challenge of operating continuously in the constantly active and variable marine environment. Building on their experience producing the world’s first offshore wave energy converter, they have developed a ‘P2’ design which is more efficient and cost effective than its predecessors.

Crucial to the success of this new design are the bearings and seals. The main tube structures are connected by the main bearings units which use a combination of Schaeffler bearings, and there are four hydraulic rams at each main joint pivoting on precision bearing arrangements.  As Mike Woods, Senior Engineer and Bearings Group Leader at Pelamis, points out, “Our biggest challenge has always been how we manage the loads and motions from such an active and constantly variable environment, whilst at the same time extracting as much power as possible. The working forces generated across each joint can be several hundred tonnes, which can present huge problems for the bearings as they have to take up the reactive forces coming back through the joints.”

The first P1 wave energy converter was a simpler design which had separated hinged joints.  Although this allowed useful working space between the axes, it had to carry high transferred loads and was unable to manage the combined motions necessary for the P2 configuration. Also, the bearings themselves were relatively high friction making the system less energy efficient.

Woods continues, “Our engineering team had been trying to work out a way of overcoming this problem and eventually came up with the idea of bringing the axes, or joints, together. However, this meant a completely new bearing solution which was able to manage combined angles in a single package, so Pelamis engineers turned to Schaeffler for help and support. Key to the success of this new joint concept was a new low friction material designed and developed in-house by Schaeffler engineers. This modified PTFE fabric liner is a member of the Elgoglide family with low friction characteristics that has effectively eliminated the problem of ‘stick-slip’. This has allowed the operating envelope of the machine to be extended beyond the capabilities allowed by standard bearing materials.

As Woods concludes, “Now that we have been able to put all the bearings in one place, we have taken a major technological step forward. As well as being a much more efficient bearing mechanism, the new design is a self-contained, modular bearing unit. It is a bit like being able to take an engine out of a car in one go; it allows us to improve our inspection procedures and reduce our exposure to technological risk. Schaeffler has been with us every step of the way and has provided us with an extremely capable, enthusiastic and knowledgeable team of specialists to work with us on our ever-evolving application. We are constantly reviewing and developing the design of the machine, and on a number of occasions we have had to reject the current design and start again.  What has surprised us is the commitment and willingness to cooperate in what has been a remarkably productive dialogue for both companies.”

The development of the P2 wave energy converter is a big step forward for Pelamis.  “We are very excited about the P2,” says Pelamis’ Business Development Director, Max Carcas.  ‘The first unit, ordered by Eon, is now nearing completion and will be fully tested in the spring of next year, but we have already received major interest and potential further orders from leading utility companies – a first for a wave power project anywhere in the world.  We are constantly striving to drive down costs whilst at the same time increasing energy capture, and by working with a supplier such as Schaeffler, we are confident that we will be able to achieve our goals.”