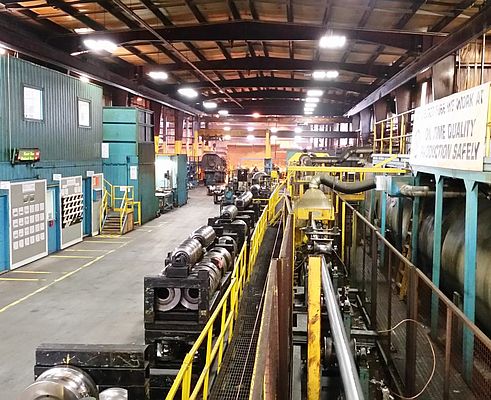 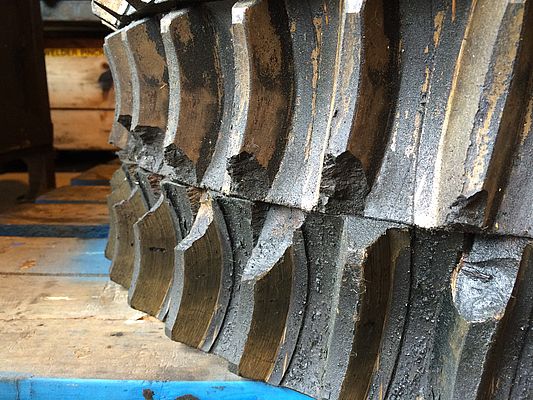 A damaged brass worm gear from the production line in Concord, Canada 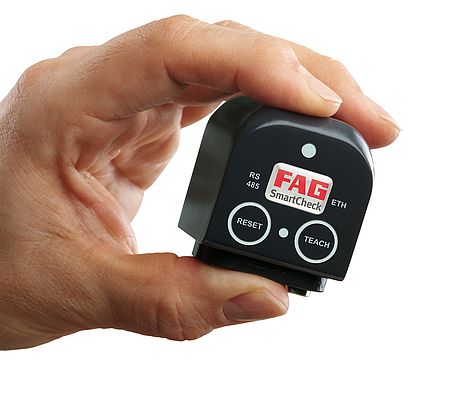 Welded Tube of Canada is a leading producer of steel tube and pipe with an annual production capacity of 700,000 tonnes. Founded in 1970, the company has 700 employees and is headquartered in Concord, Ontario, Canada. Welded Tube owns and operates five manufacturing and finishing plants in Canada and the US, which serve the needs of the North American market.

Welded Tube’s metal tube forming line in Concord comprises of four sections: forming, finishing, sizing and squaring. In the first three sections, only one electric motor drives three to four gearboxes. The forming line manufactures tube on a continuous basis. Therefore, if a gear stops turning or a gearbox fails, the whole production line comes to a standstill. This is particularly true of the large, costly brass worm gears on the 13 tube forming gearboxes. If these gears are damaged or fail, the subsequent costs of unplanned downtime is extremely high.

Welded Tube therefore decided to introduce a predictive maintenance regime at Concord. This would increase gearbox availability and achieve extended lead times for gearbox spare parts. The main requirement was to introduce a cost-effective condition monitoring solution with reduced cabling effort, which could also be used on standard double output drives.

The decision to implement a system based on FAG SmartCheck units from Schaeffler paid for itself as soon as the first unplanned downtime was prevented. Furthermore, the company saved a six-figure sum (approx. 126,000 euros) after just six months.

The solution recommended by Schaeffler was to continuously monitor the condition of all gearbox shafts and gearbox bearings, as well as the brass worm gears. This was implemented by installing 13 FAG SmartCheck units to monitor gearbox vibrations from the 13 tube forming gearboxes.

An FAG SmartController was also installed, which acts as a bi-directional gateway between the customer’s control system and the sensors. Both the signal routing and the power supply (Power-over-Ethernet) for each FAG SmartCheck unit were implemented using a single Ethernet cable, while the production facility and monitoring office were linked wirelessly using a WiFi router.

Due to their complex gear ratio, the brass worm gears are technically very difficult to monitor. However, FAG SmartCheck units feature special frequency-selective component specifications and a “track frequency band” template, which means they are more than a match for these complex requirements and are suitable for both standard and special gearboxes.

Investing in condition monitoring solutions based on FAG SmartCheck units often pays for itself within a short period of time by helping to prevent unplanned downtimes and their subsequent costs.

Shortly after being put into service at Concord, the FAG SmartCheck devices proved their reliability by identifying high vibrations on various gearboxes. In just six months, Welded Tube’s maintenance team detected three brass worm gear failures at an early stage. This information was particularly important, as gearbox spare parts were only available on long lead times.

Welded Tube is so satisfied with the condition monitoring solution and services provided by Schaeffler that it has now also switched to sourcing bearings from Schaeffler. Furthermore, the company plans to install additional FAG SmartCheck units at two further Welded Tube plants in Welland (Canada) and Buffalo (USA).

Energy Efficiency
By analysing vibration data, Schaeffler has been able to detect damage to components such as rolling bearings and gears early, therefore eliminating costly, unplanned downtime and prolonging the life of motors and gearboxes
Read more