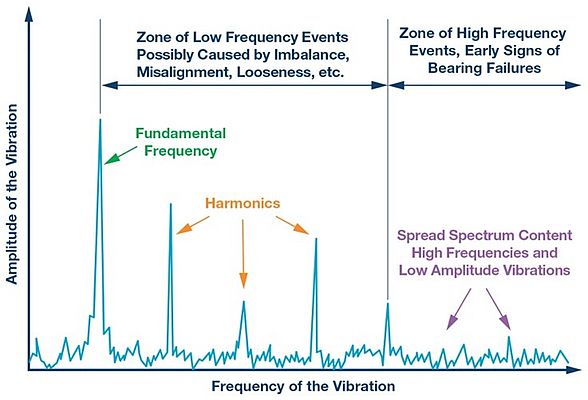 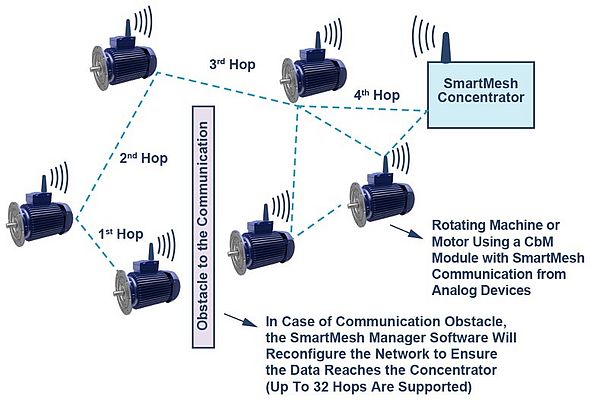 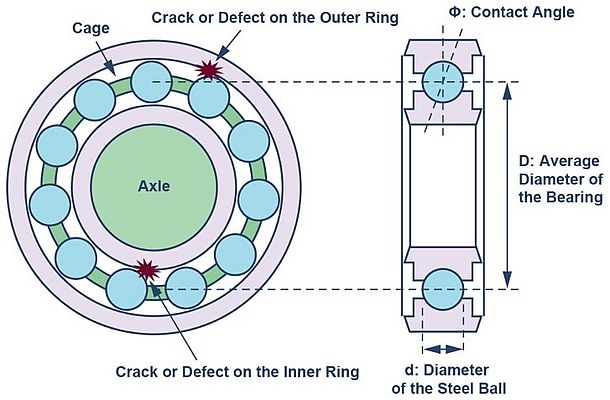 Industry 4.0, made possible by the generalization of digitization and connectivity for industrial equipment, is on track to revolutionize production tools. This game changer makes the production chain more flexible and allows for the manufacture of customized products, while maintaining earnings. Maintenance, too, can benefit from the advantages of digitization and connectivity of the IIoT. Instead of replacing worn parts at fixed intervals, the use of sensors—particularly accelerometers—makes it possible to analyze a machine’s operational status. Within the predictive maintenance framework, the operator need only intervene if certain early warning symptoms occur. Known as condition-based monitoring (CbM), this analysis of the machine’s health status will limit maintenance costs when compared with a systematic maintenance system, which is based on a fixed, often very conservative schedule. In addition to the gains from less stringent maintenance operations, detecting problems at an early stage allows for planned machine downtime, which is always better than an unexpected shutdown of the production line.

Vibration Analysis: The Importance of the Sensor

To determine when it is the right time to trigger a maintenance operation, the manufacturer uses parameters such as vibration, noise, and temperature measurements. Among the measurable physical quantities, measurement of the vibration spectrum is the one that provides the most information on the origin of a problem in a rotating machine (engine, generator, etc.). An abnormal vibration can be a sign of a faulty ball bearing, axle misalignment, imbalance, excessive looseness, and more. Each of these problems will manifest itself in a specific symptom, such as vibration sources in rotating machines.

Vibration measurements can be performed using an accelerometer that is placed near the element to be monitored. This sensor can be of the piezoelectric type or, more advantageously, of the MEMS type, which not only gives better response at low frequencies but is also small in size.
In the case of a faulty ball bearing, every time a ball comes into contact with a crack or a defect of the inner or outer ring, a shock will occur, causing a vibration or even a slight displacement of the rotational axis. The frequency of these shocks will depend on the speed of rotation and the number and diameter of the balls.

But that’s not all! As soon as the fault appears, the previously mentioned shocks will create a sometimes-audible noise—the shock wave—that manifests in the appearance of low-level spectral components and relatively high frequencies, often greater than 5 kHz, and always well beyond the fundamental rotation frequency. Only low noise, high bandwidth accelerometers—such as the Analog Devices ADXL100x—can measure the spectral lines corresponding to the first signs of failure. These accelerometers will provide valuable information where slower or noisier products will not sense anything. As the defect worsens, the level of the lower frequency components will increase. At an advanced stage, the level of vibration can be detected by an entry-level accelerometer, but the failure will be imminent at this point, with little time for the maintenance team to react. To avoid being caught off guard, it is important to detect the very first signs of anomaly with a low noise, high bandwidth accelerometer.

In addition to the ADXL100x series of accelerometers (ADXL1001/ADXL1002/ ADXL1003/ADXL1004/ADXL1005), Analog Devices also offers a number of other accelerometers that are useful for analyzing machine status. For an observation over a more restricted bandwidth, the products of the ADXL35x series (ADXL354/ADXL355/ADXL356/ADXL357) are characterized by a low level of noise (down to 20 μg/√Hz and a bandwidth of 1500 Hz). Unlike the ADXL100x series that offer analog output, there are products in the ADXL35x series with digital output to simplify the interface with a microcontroller.

Entry-level consumer-oriented products such as the ADXL34x (ADXL343/ADXL344/ADXL345/ADXL346) or the ultra low power ADXL36x (ADXL362/ADXL363) accelerometers will not really have enough bandwidth or noise performance to meet the requirements for quality predictive maintenance.

These entry-level products limit not only the diagnostic capabilities of existing equipment, but they also significantly limit the usability of the data for development of future diagnostic solutions.

However, they can be good candidates for measuring machine activity, for example, to count the number of hours of operation and, if necessary, trigger maintenance—not predictive but only preventive maintenance. Thanks to their extremely low power consumption, these accelerometers can operate with power harvesters (energy harvesters) or by battery.

If the desired machine monitoring consists only of measuring sudden shocks, the products of the ADXL37x series (ADXL372/ADXL375/ADXL377) are a perfect fit. Since a shock can be considered to have altered equipment accuracy or operation, it will be possible, for example, to trigger a maintenance operation of a corrective nature to correct any defects that might have appeared.

From Components to Complete Modules

As previously mentioned, the ADXL100x series is characterized by a wide bandwidth and low noise level. However, they are single axis and require associated processing electronics. To simplify the design phase, Analog Devices offers a turnkey solution for triaxial measurement with model ADcmXL3021. This 3.3 V powered product incorporates three measurement chains based on the ADXL1002, as well as a temperature sensor, a processor, and a FIFO. The whole ensemble is encapsulated in an aluminum case (23.7 mm × 26.7 mm × 12 mm) that is ready for installation on the rotating machine. The product is characterized by a full scale of ±50 g, an extremely low noise level of only 25 μg/√Hz, and a bandwidth of 10 kHz, which allows vibration signature capture in a large number of applications.

A signal processing block includes not only a configurable FIR filter with 32 coefficients, but also an FFT function with 2048 points per axis to perform spectral analysis of the vibration. Each frequency level of the spectrum calculated this way will be compared to the configurable alarm thresholds (six per axis). If the spectral components are too intense, an alert will be generated. This product can interact with a host processor via an SPI port that provides access to internal registers as well as a set of user-configurable functions, including advanced mathematical functions such as calculating the average value, standard deviation, maximum value, crest factor, and kurtosis (fourth-order kinetic moment that enables measurement of the acuity of the vibration).

SmartMesh: A Network for the IIoT, Well Adapted to Predictive Maintenance

A wireless network is particularly well suited for collecting maintenance data from a vibration sensor. It does not need to be fast, but it must be robust enough to operate in industrial environments that are often very disturbed and made of metal structures that are unsuitable for good transmissions. It must also be able to collect data from a large number of sensors that are not necessarily close to the data logger. To meet this need, Analog Devices offers the SmartMesh® IP industrial mesh network, which is characterized as highly robust to disturbances with low power consumption. This last criterion is important for maintenance modules that are variously powered by energy harvesting or by a lithium battery that must operate for five or 10 years without replacement. Based on the 6LoWPAN standard (IEEE 802.15.4e), the SmartMesh IP network is perfectly adapted to the IIoT and relies on a proprietary protocol built around a 2.4 GHz transmission. The solution consists of LTC5800 transceivers or precertified LTP590x modules, which are very easy to implement.

Various techniques are used to guarantee a transmission reliability greater than 99.999%, including synchronization, channel hopping, and time stamping, as well as a dynamic reconfiguration of the mesh network that uses only the RF paths where the signal is most powerful.

Why Not Get Help from Artificial Intelligence?

There are a number of vibration analysis techniques. In addition to the digital filtering to overcome the parasitic vibrations caused by the process itself or by other components of the machine, it is common to be aided by mathematical tools such as those included in the ADcmXL3021 (calculation of the average, standard deviation, crest factor, kurtosis, etc.). The analysis can be done in the time domain, but it is the frequency analysis that will bring the most information about an anomaly and its origin. One can even resort to calculating the cepstrum sometimes assimilated into the spectrum of the spectrum of the signal (inverse Fourier transform applied to the logarithm of the Fourier transform of the signal). However, whichever analysis method is used, the difficulty is in establishing the optimum alert threshold so that a maintenance operation will be neither too early nor too late.

An alternative to the traditional configuration of alarm thresholds is to introduce artificial intelligence into the failure identification process. During the machine learning phase, cloud resources are used to create representative models of the machine based on data from the vibration sensor. Once the models have been created, they can be downloaded to a local processor. The use of embedded software will enable the real-time identification of not only ongoing events, but also transient events, and will thus be able to detect anomalies.

One of the problems commonly encountered in a rotating machine is the failure of a ball bearing. Spectral analysis of the data from an accelerometer placed close to the bearing reveals a number of characteristic lines, amplitude, and frequency that depend on the speed of rotation and the origin of the defect.

In addition to building models for predictive maintenance, artificial intelligence and cloud access open the door to a host of new possibilities. Correlating the vibration measurements with the data from other sensors (pressure, temperature, rotation, power, etc.) makes it possible to deduce much information on the system status well beyond what’s related to maintenance needs. The merging of basic data will enable refinements in the equipment models to detect not only mechanical failures, but also process problems (for example, an empty conveyor, a pump without fluid, a mixer without paste, etc.). We can therefore consider a multitude of services that equipment manufacturers can offer to their end customers by combining equipment supply with maintenance and statistical analysis of the performance and problems of a production line. Equipped with its sensor module, the basic electric motor becomes a major player in the big data concept.

Automation, Industry 4.0
From the invention of the cotton gin and the steam engine during the first industrial revolution to the development of the assembly line during the second revolution, the world has taken great leaps forward thanks to the rapid adoption of new technology
Read more

Automation
In this article, Analog Devices explains why Ethernet-APL will be a game-changer in the process automation world, creating new opportunities and business models thanks to rich datasets for cloud computing with powerful data analytics
Read more
View all supplier's articles

Automation, Industry 4.0
To accelerate the path to industry 4.0
Read more

AN INDUSTRY FIRST FOR INDUSTRIAL ETHERNET