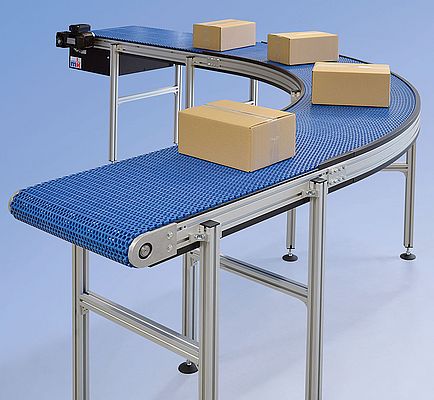 Maschinenbau Kitz produces modular belt conveyors that are extremely robust and offer opportunities for virtually any transport application. They are more wear-resistant than belts and can also be used where sharp-edged goods need to be transported or where harsh application environments persist.

Due to their positive drives, modular belt conveyors can sustain very high loads even with small belt widths. Besides, the lateral guide of the belt resists the lateral forces, as a result of which workpieces can also be pushed off transversely. Another advantage is that fluids from the transported material can drip off through the chain and the modular belt conveyor can be cleaned easily and quickly.

The existing portfolio of straight and incline (vertical) modular belt conveyors will now be supplemented by curved sections. These are based on the same system and are available with different route layouts and curve angles. Using individual variations, the route layout can be perfectly tailored to the existing conditions. In addition to this, various band widths ranging from 164 to 1005 mm have a very good ratio of effective width to the overall width and can thus be used very well even in cramped spaces. Due to the modular design and the combination of straight sections and inclines, practically any route can be implemented in three-dimensional space.

Social Distancing in Production and Logistics

Industrial Equipment & Supplies
Kaeser Compressors. The U.S. Department of Energy estimates that air compressors use as much as 10% of all electricity generated in the United States. Further, the DOE calculates that as much as 50% of this energy is wasted. Compressed air leaks alone account for 25-30% of compressed air use. Consequently, many industrial companies are identifying ways to lower their compressed air system energy consumption....
Read more