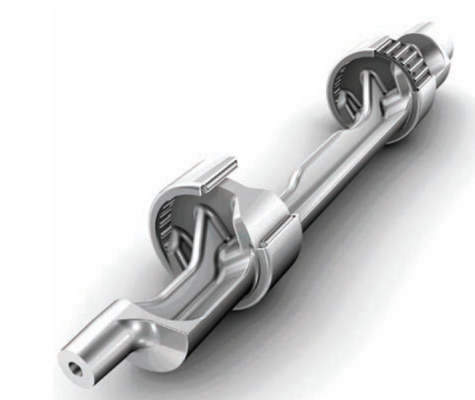 The new Mercedes-Benz OM 651 is a 2.2 litre, four-cylinder engine that produces up to 204ps and 500Nm torque. It is a high-performance diesel engine that sets new standards in terms of performance and fuel consumption. The weight of the balancer shaftand bearing assembly are optimised in order to improve engine efficiency and reduce overall fuel consumption.

The INA lightweight balancer shaft was developed primarily for four-cylinder applications such as the OM 651 engine. By replacing conventional plain bearings on the balancers haft with rolling bearings, friction is reduced. Using needle roller bearings with a raceway directly on the shaft reduces friction by up to 50% over the whole speed range.

At the development stage, by analysing engineload conditions, engineers were able to optimise weight distribution. This enabled the width of the bearing to be reduced, which meant that the weight of the shaft in the OM 651 could be cut by more than a third. This equates to a weight saving of 0.75kg for the engine.

When designing the complete drive train for the OM 651, Mercedes engineers were then able to utilise this reduced shaft rotational inertia. The lower mass moment of inertia reduces the load in the power train, therefore improving the acoustic characteristics. In addition, the narrower raceway improves the oil mist supply to the rolling bearings, enabling a simpler system design without oil feed holes, reducing manufacturing costs. The engine requires a lower throughput of oil, so the oil pump can also be made smaller.

All of these technical improvements meant that engine fuel savings of around 0.5% to 1% were achieved. The OM 651 engine will play a significant role in Mercedes-Benz’ new hybridengine vehicle fleet. The engine can be combined with the modular hybrid systems forrear-wheel drive platforms.

With the global market for four-cylinder engines standing at almost 50 million systems per year, the lightweight balancer shaft assembly offers huge potential for reducing engine fuel consumption and emissions. For example, based on an average reduction in fuel consumption of 1% over the life of an engine, and calculated for a vehicle mileage of 250,000km, this would lead to approximately 175 litres of fuel savings. Even if only 25% of all four-cylinder engines were fitted with INA lightweight balancer shaft assemblies, this would still reduce harmful CO2 emissions by around six million tonnes per year.