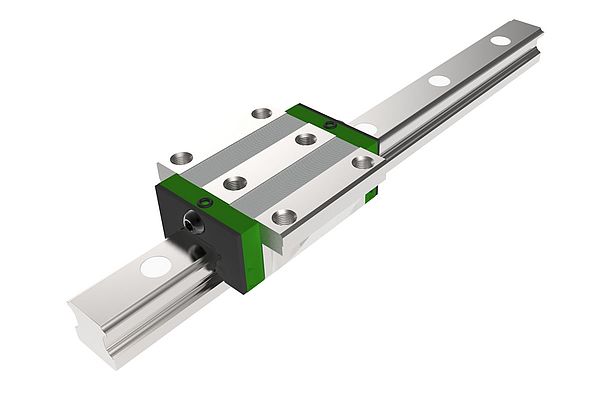 With its new KUSE six-row linear recirculating ball bearing and guideway assembly, Schaeffler has proved that significant technological advances in linear technology are still possible even for well-established products. By improving the design of the infeed zone on the carriage saddle plates, Schaeffler has now succeeded in increasing the load ratings for six-row KUSE linear recirculating ball bearing and guideway assemblies by up to 44%, depending on the size and design. As a result, the rating life is three times higher than that of conventional designs. Due to the significant increase in performance, the redesigned KUSE series has been awarded the Schaeffler X-life quality mark.

Up to 83% reduced pulse amplitude

Six-row linear recirculating ball bearing and guideway assemblies in X-life quality have a high level of rigidity and extremely low pulse amplitude. They can now also be used in applications where vibration levels must be kept to a minimum and where very high accuracies are required, for example, in measuring machinery. In general, the recirculating rolling elements prevent a constant number of fully loaded rolling elements being present in the load zone of the carriages. Depending on the effective number of rolling elements in the load zone, the carriage balances deflections along the stroke to varying degrees. This causes a slight, pulsing equalising movement in the load direction of the carriage. This kind of movement is called ‘stroke pulsation’.
Pulse amplitudes of up to 1 µm (peak-to-peak) for a single ball are not uncommon. For the new KUSE X-life guidance systems, the contour of the infeed zone has been optimised in such a way that the stroke pulsation is considerably reduced, particularly at higher loads. For example, at a load of 1.35 tonnes, the pulsation amplitude is less than 0.1 µm – a reduction of 83%.