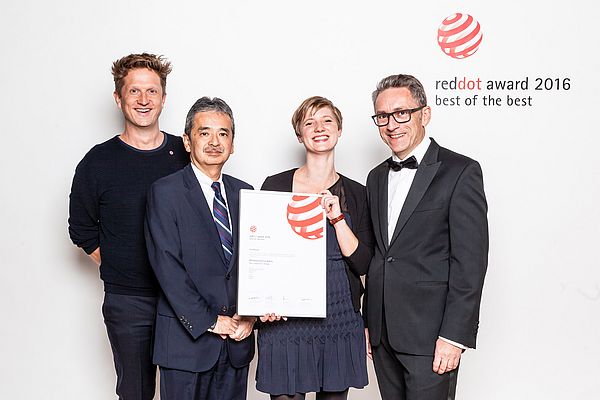 Mitsubishi Electric has been recently presented with the “Best of the Best” and “Grand Prix 2016” awards at the prestigious Red Dot Gala. The prizes were awarded for the interactive “Threebots” robot application which can be found at the company’s German branch in Ratingen. Yuji Suwa, Branch President, and Georg Jennen, General Manager of the German Branch, received the awards as representatives of the company before about 1,400 invited guests.

The “Threebots” display is an interactive concept which is part of “The World of Mitsubishi Electric” exhibition, housed in Ratingen. It consists of three industrial robots which are joined in a technically challenging choreography. The continuous, perfectly coordinated routine features simultaneous animations on the monitors. The effortless motion demonstrates the technology capabilities of the robots and vividly illustrates other product ranges from Mitsubishi Electric.

The robots in the display are deliberately choreographed to break with conventional robotic motion patterns. The result is a poetic display of the robots’ dexterity and total flexibility.