Recent advances in technology have unlocked unprecedented modalities of capturing the physical world in digital form. One of those modalities is light detection and ranging, or LIDAR. 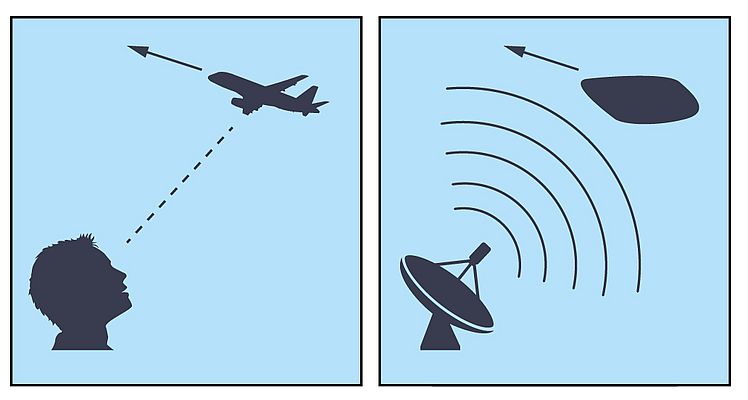 What we see vs. what a radar sees. 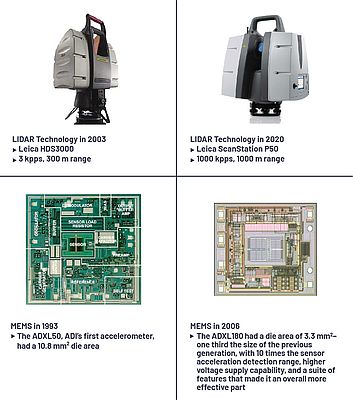 Leaps in development of LIDAR and MEMS technology over 13 years, respectively. 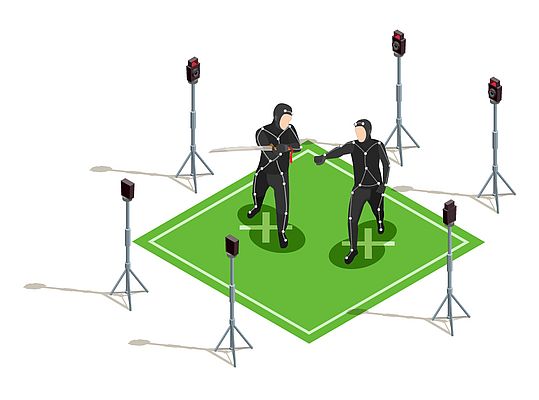 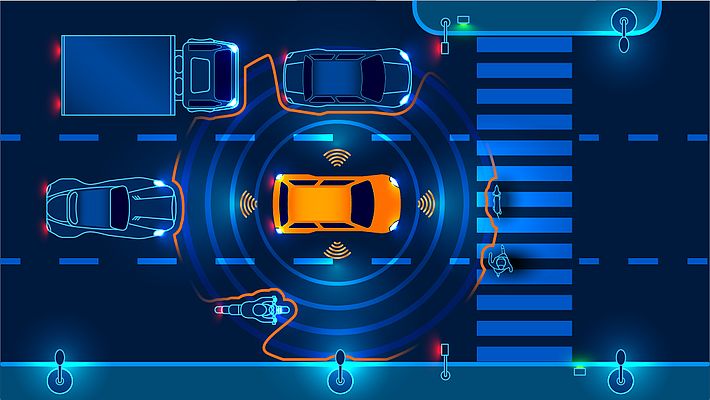 A car detecting features of proximal objects at night, allowing for the safe operation of the vehicle. 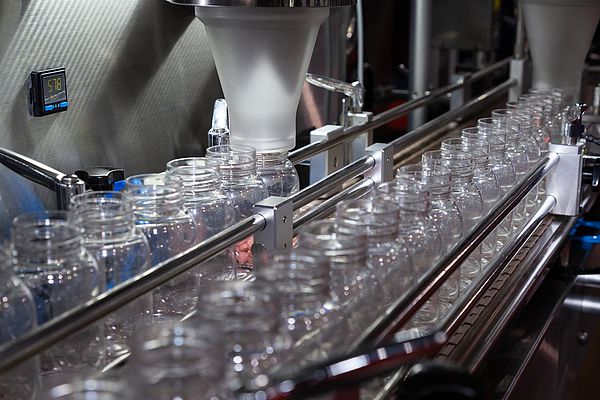 Damage and defects can be detected before bottling where it often is not practical to set up a large vision system (which is more often used after the bottles are filled and packaged).

Analog Devices. Many applications and industries have adopted LIDAR technology; the applications range from geographical survey to 3D structural mapping and object recognition. Industries include manufacturing automation, safety, agriculture, and many others. All these applications and industries have leveraged LIDAR to drive down costs, create safer environments, improve efficiencies, or even do things not previously possible. To better understand the impact of LIDAR, it is important to understand what this technology is, what was used before it, and what LIDAR allows us to actually measure and, more importantly, do.

At the most fundamental level, LIDAR is a system that bounces light off objects to detect them. This boils down to a transmitting portion of the system that emits light, and a receiving portion that measures the reflected light’s time of return. This happens to be exactly how traditional radar systems work, with one very important difference—the wavelength of LIDAR systems is on the order of ten thousand times shorter than the shortest radar wavelengths.

What Is Different with LIDAR?

What does a much shorter wavelength enable us to do that we could not do with radar? A shorter wavelength allows us to see a much higher resolution image, due to a physical limitation that a measurement cannot be more precise than what is used to measure it. Even with tricks in software and signal processing, you can only characterize something so well if you are using long wavelengths to do it. With LIDAR’s shorter wavelength, we can scan the environment for objects and their features, instead of being limited to only knowing location, rough size, and velocity.

Imagine trying to navigate an unfamiliar dark room. You generally move more slowly than when it is illuminated, and you would use your hands to feel around for objects to get a sense of what is where. Take that same scenario and put on a pair of latex gloves, gardening gloves, or boxing gloves. Each of those pairs of gloves have value in their own applications, but not so much when trying to navigate in the dark.

Hasn’t LIDAR Been Around for Decades? What Is New?

Radar has been used very successfully for many decades and will continue to be invaluable, but now we have an additional tool coming up on the horizon that will allow us to further extend our ability to sense things in this world. Until now, LIDAR has been restricted to applications that are large and expensive (like specialized surveying equipment) or smaller and simpler (like speed detection devices used by law enforcement).

A high performance LIDAR system must meet certain criteria. The transmitting portion, for example, needs to pulse the laser for 3 ns to 5 ns at a peak of 40 A to 80 A to make it attractive for automotive—laser drivers are finally approaching these metrics of interest, making this portion of LIDAR a reality. Other factors include small and efficient power management, integration of subsystems, inexpensive high speed data processing, and sophisticated software to make sense of all this data. Our ability to push LIDAR systems’ performance up and power budget down is nearing the point where they make sense to use in many applications where they simply could not meet demands previously. Due to this approaching critical mass, the collective effort in driving down the cost, size, and power needs while increasing performance is accelerating the attraction to this solution.
Like the microelectromechanical systems (MEMS) revolution of the 1990s, LIDAR today is becoming smaller, cheaper, and more versatile. Both LIDAR and MEMS took a long time to fully realize their potentials to other systems and subsystems. MEMS, while developed in the 1950s, was never a practical option to integrate into many systems due to its cost, size, power needs, and performance. It was not until process technology in the 1990s was mature enough to match demand to allow proliferation of MEMS into applications never dreamed of before. Similarly, LIDAR (developed in the early 1960s) is only now ready to meet similar demands.

What is currently changing is the confluence of factors that goes into the design and manufacture of a high performance LIDAR system. These additional factors have helped LIDAR meet the constraints inherent in it, such as driving down cost, solving size and power issues, and increasing overall performance. Because these factors have helped LIDAR technology with enhanced performance while decreasing development costs, it makes sense to begin pursuit of other areas for LIDAR application.

What Is LIDAR Allowing Us to Do that We Have Not Done Before?

Imagine what sorts of novel technologies can be developed with a system that can scan surfaces when it is within a much more attainable price point. Here are a few recent innovations to the application of LIDAR systems:

A boon in the entertainment industry has been the ability to map out complex sets or objects digitally, allowing for a more seamless interaction between reality as we know it and realities generated by software. In movies or video games, for example, this allows for fluid 3D motion capture by human actors transcribed into a fictional universe that until now relied on expensive suits with sensors (which conveyed limited movement information) or homebrew animation (which, depending on detail desired, can be slow and expensive).

LIDAR has been used in geographical surveying for some time, but the increase in range and resolution of these systems has allowed researchers to uncover ancient ruins that would not be feasible to investigate by foot. The constantly decreasing size and cost is also making it much more attractive for civil land surveying and engineering, with advantages over traditional land surveying methods in speed, accuracy, flexibility, and safety.

As a building is being constructed, LIDAR can be used to monitor construction progress in real time, compare those measurements to current schematics, and allow for updating of those schematics. Existing structures can also be scanned to better understand the evolution of integrity over time, which would allow us to more appropriately assess needs for renovation or rebuilding.

The panacea of autonomous driving is the addition of a low cost LIDAR system to complement the suite of instruments that currently measures the surroundings of a vehicle. LIDAR signals allow the autonomous system to gauge the detailed surface features (thereby object identifying) that radar cannot and cut through weather obstructions much better than a traditional vision system.

Outfitting what were traditionally simple “Is there something in front of me?” sensors with LIDAR systems can have the benefit of knowing how and when to respond in safety situations. A robotic arm that handles heavy objects will be able to respond more keenly when a person-like object enters its path as opposed to an object that it was designed to handle.

Simple sensors have been used for years to detect things like the level of grain in a silo, the state of crops, fuel level, and so on. What these methods often do not capture is the deeper context, like how the shape of the mound that the grain makes when poured into the silo and where it is measured (highest, lowest, mean, or arbitrary point) can affect how efficiently the storage is being utilized. Currently, the only way to capture this information using traditional methods is by using multiple sensors, which itself has resolution limits while adding significant cost to manufacturing. Being able to capture a whole crop’s growth in granular detail over time provides important data and can inform on cultivation practices, both in real time and for future crops. LIDAR can also help optimize the movement of automated machinery in harvesting crops.

Knowing the physical structure in precise detail adds tremendous value to robotics, which can more accurately and appropriately handle objects of various sizes and geometries. This can be extrapolated to any manufacturing or warehouse context that involves repetitive handling or sorting. Having this additional information can also allow for the relaxation of otherwise unnecessarily tight tolerances in manufacturing, saving costs in production and quality control.

The previously discussed applications are ones that are currently being or have already been developed. As is always the case in human endeavors, it is impossible to know what other creative and useful ways people will come up with to use technology such as LIDAR. If you have a product or system that may be able to leverage the benefits of LIDAR, Analog Devices has the expertise to help along the journey from conception through creation to make that idea reality.

Seeing If LIDAR Can Provide Value for Your Company

Analog.com/lidar contains a launch pad for companies looking to get into the LIDAR space or to enhance their current offerings. For a high level, applications-based approach, contact our systems experts for guidance on how to approach these problems. For a technical approach, we have evaluation platforms such as the AD-FMCLIDAR1-EBZ development platform that can help get your product to market faster by avoiding unnecessary design.

Electronics & Electricity
A televised and streamed special "One World: Together at Home" will be hosted on April 18, 2020
Read more

“We can provide resourceful collaboration with customers by providing new or alternate perspectives to solving known or unrecognized challenges.”