Measuring and recording up to 64 channels

Gossen Metrawatt has launched the new, modular SU1604 summator for energy control systems (ECS). It can be expanded to up to 64 processing channels. Users can assign electrically isolated S0 counter inputs for processing pulse-shaped S0 input signals to individual channels. They can also choose to assign LON devices, with all the added benefits of this easy-to-wire, electrically isolated interface featuring polarity reversal protection. Energy or consumption data are collected in lockstep with the energy supplier's measurement cycle and added up over defined time periods and a programmable interval and saved along with the corresponding maximum values. In addition to the interval-based data list, up to four recorders with up to 64 channels and different time bases starting from one second can be defined. Each channel can be parameterized for any measured data such as analog, power, and consumption values in the interval or for running totals.

Measured data comprise 32-bit float values or 64-bit double values saved to 100 MB of rolling storage space. This autonomous database for all electrical and non-electrical energy and consumption data enables visualization, consumption optimization, and cost-related billing. The summator features an RS485 and an RS232 interface as well as an Ethernet port for remote access to device data via TCP/IP. Four TCP/IP sockets with ECL access can be used simultaneously, and two of these sockets can be used for ECS-LAN networking. The U1604 summator is suitable for supplementing or replacing ECS summators from the U1600, U1601, U1602, and U1603 series. Thanks to intelligent evaluation electronics with the system's own programming language, the summator can also be used for customer-specific calculation, evaluation, monitoring, and optimization of energy values without integration into an ECS. 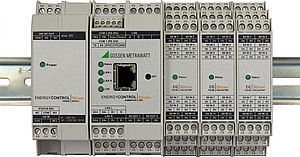 Measuring and recording up to 64 channels