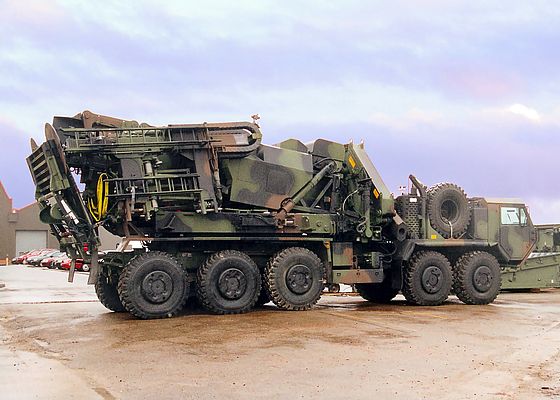 The importance of mobile bridges has grown for military forces and rescue organisations alike. Gearboxes and winches help to put them in place.

WFEL Ltd aims to meet targets for increased mobility and reduced manpower with the innovative mobile bridge launch vehicle design of its Dry Support Bridge (DSB). A DSB's launch vehicle uses compact, light-weight planetary gearboxes and winches to reduce weight and achieve higher power operation in a confined area. It can span gaps of up to 46 metres and can be constructed in under 90 minutes.

The importance of mobile bridges has grown as military forces and rescue organisations alike seek to extend the usability of heavy equipment by using transporters to bring them closer to the front line before they are deployed. This poses problems, as the combined weight of a battle tank for example and its transporter is around 96 tons, beyond the capacity of most mobile bridge systems, but not WFEL's DSB, which was designed specifically for this purpose. The design has been developed drawing on over 40years cumulative experience in building mobile bridge systems for military use.

The company is known for its Dry Support Bridges (DSBs) allowing large gaps to be spanned quickly and has won a recent contract from the US Department of Defence (DoD) to supply a further tranche of its next-generation military bridging system. The order, which is the fourth phase of a framework agreement originally agreed with the US in 2000, is for the supply of new WFEL Dry Support Bridges (DSB). To date, the US has ordered almost 100 DSB's.

The large distances over which the WFEL Dry Bridge Systems have to be transported and the usually harsh and uncertain nature of the terrain means that they not only have to be robust but also as compact and lightweight as possible. WFEL's development design for a wheeled deployment vehicle addresses these demands in two ways: by using aluminium as the primary material of construction and by employing components that provide high levels of output and reliability from the smallest possible operating envelope. In terms of gearboxes and winches this means planetary units.

These were employed after experience with the prototype launcher vehicle showed that conventional gearboxes and winches were too heavy for the output power required. Brevini planetary units were chosen to provide the same or greater levels of torque output as the original conventional gearboxes but are generally half the size and weight. As a result, two multistage gearboxes, from the standard range, and two specially adapted variable speed winches are used on each vehicle.

The function of the gearboxes is to drive the telescopic launching beam, which is mounted on the back of the vehicle. The launching beam is deployed whenever a span is encountered. It is extended progressively, under the low speed control provided by the combination of the Brevini gearboxes and hydraulic motors, until it reaches the extent of the span. The bridge sections are then attached to carriages on each side of the beam and indexed into position by variable speed hoists. The total process has been designed to be deployed in under 90 minutes and is completely interlocked to prevent any inadvertent operations, which could damage the structure.