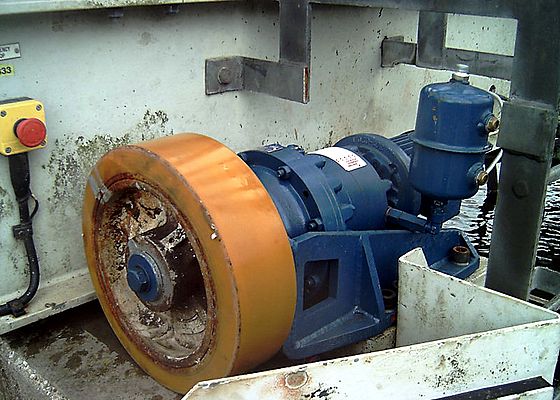 Welsh Water was experiencing problems with ageing worm gear drives on six half bridge scrapers. Fortunately a 'no-engineering' solution could be provided using planetary gearboxes that fit in the footprint of the original boxes.

At Welsh Water’s Sewage Treatment Works (STW) they were aware that the worm gear drives of six scrapers were approaching the end of their operating lives. Rather than re-engineering the obsolete drives it was decided that a modern solution should be sourced that would improve the site's efficiency. However, remanufacturing the bridge structures for new drives would be potentially costly. They wanted to replace the drives with a solution that would offer high efficiency and long life, without the costly downtime of remanufacturing the gearboxes or bridge structures. Welsh Water was aware of Brevini's ability to design drive systems into existing footprints and approached the company to offer a solution.

Dave Brown, Brevini UK Sales Manager, comments: "We are proud of our ability to provide efficient solutions that do not require costly remanufacture and downtime; our trained sales engineers visited the site and took all the measurements required. This project was a little trickier than previous ones as the worm gearboxes were set well back and there was a foot mounted housing containing the bearing assembly to support the bridge. However, we were able to provide a planetary solution that utilises the highly rated taper roller bearings in the output assembly to support the bridge directly by fitting the wheel onto the gearbox shaft."

Planetary gearboxes can efficiently accommodate the high reduction ratios and arduous applications often associated with the water industry. Using sophisticated software, it can be verifies that the gearbox lifetime, in all respects, will exceed the design life of the equipment it is driving; in the case of continuously operating equipment in the water industry this can often be in excess of 100,000 hours.

Aside from robustness and high efficiency, planetary gearboxes are also ideal for retrofitting in place of older, obsolete gear designs as their compact nature allows them to be designed into the available space envelope with relative ease in most applications.

In total six planetary solutions were delivered to the STW. Welsh Water wanted to use standardised wheel sizes, so each drive was supplied with a specialised smaller diameter shaft than standard to accommodate this. The drives were designed and supplied by Brevini which meant that technicians on-site only had to drill holes to accommodate the drive foot bracket on the existing structure.