What is a LVIT and where are they used? LVITs, Linear Variable Inductive Transducers, which have been around for more than 30 years, are relatively low cost, contactless position sensing devices that utilize eddy currents developed by an inductor in the surface of a conductive movable element that is mechanically coupled to the moving object whose position is being measured. The common form of an LVIT uses a small diameter inductive probe surrounded by a conductive tube called a “spoiler”. Typical LVITs have full ranges from fractions of an inch to 30 or more inches. Modern electronics utilizing microprocessors make possible outstanding performance, achieving linearity errors of less than ±0.15% of FSO and temperature coefficients of 50 ppm/ºF, along with either analog or digital outputs. See Figure 1 for a cutaway view.

LVITs are used in many factory automation applications, including packaging and material handling equipment, die platen position in plastic molding machines, roller positioning and web tension controls in paper mills or converting facilities, and robotic spray painting systems. Being contactless, the basic measurement mechanism of an LVIT does not wear out over time due to rapid cycling or dithering like a resistive device. LVITs also offer a much lower installed cost than that of most other contactless technologies. While Figure 1 shows a LVIT that is intended to be attached to the part it is measuring, LVITs can also be spring loaded, as shown in Figure 2. The natural question is: where does one use a springloaded LVIT sensor versus another spring-loaded technology such as an LVDT gage head?

In fact, LVITs can be used in place of traditional gage heads primarily because, electrically, an LVIT offers the same resolution and repeatability and, mechanically, the same outer diameter and an external mounting thread, but with about half of the length of the gage head, making the stroke-to-length ratio of an LVIT substantially better. And all of these features come at a markedly lower cost. Why utilize a 9-inch long sensor to measure 1 inch of travel when the same performance can be achieved with a 4-inch long LVIT sensor? LVIT-based gaging applications in factory automation typically mirror those for traditional gage heads, as shown below. When compared to LVDT pencil gaging probes, a spring-loaded LVIT can satisfy many of the same applications: automotive, medical and mil/aero test stands, robotic arms, part placement, and shopfloor dimensional gaging applications to name a few. Pencil probes are typically selected for one of two reasons: resolution and repeatability, or size. Pencil probes are smaller (either 8mm or 0.375 inch OD) than LVITs and have resolution and repeatability of 4 millionths of an inch. However a pencil probe requires a separate LVDT signal conditioner, making the cost per channel typically double the cost of an LVIT. If an application does not require the specific features of a pencil probe, a spring-loaded LVIT is a much lower cost alternative.

Some factory automation applications that have been solved by proximity sensors can be better satisfied with LVIT technology, which offers a proportional analog output, giving greater control flexibility than merely an NPN or PNP TTL switching signal. The spring-loaded LVIT shown in Figure 2 has an 18mm thread on its housing, matching a thread commonly used by proximity sensor manufacturers. With an LVIT’s short body length, the sensor can fit in places or mountings where there previously was a proximity probe.

All LVIT products offered by Alliance Sensors Group also feature ASG’s proprietary SenSet™ field programmable scaling, which allows a user to adjust for any mechanical variations after installation in the application simply by pushing a button or grounding a single connection. This SenSet feature reduces setup time and total cost of ownership. As a typical example, consider a 6-inch range LVIT being used to measure the position of a process valve stem that moves 5.5 inches. By using SenSet to scale the output of the sensor after it has been installed, the  full 4-20 mA output can be obtained over the 5.5 inches that the stem actually moves. 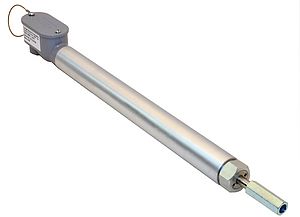 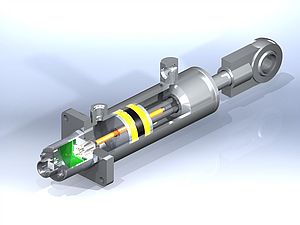 Variable Inductance Linear Position Sensors for use in Hydraulic Cylinders 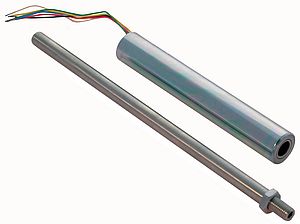 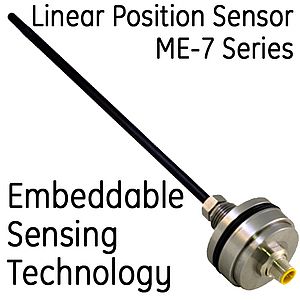