Having the objective to find concrete solutions to the latest challenges for decarbonization and digitalization, POWER-GEN Europe and European Utility Week offer an end-to-end event to showcase the best smart technologies for the electricity sector 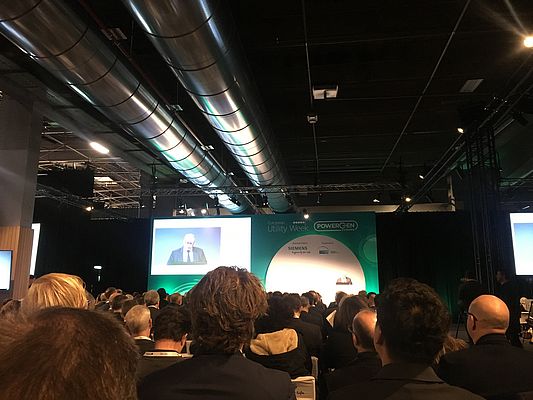 Concentrated in three days, POWER-GEN Europe, created in 1993 to become the flagship event for the power generation sector in Europe, and European Utility Week, the ideal stage for the smart energy community, ran in parallel for the first time to embrace the whole energy supply chain and offer a comprehensive platform for all key players in the smart energy ecosystem.

The list of exhibitors, the intense program of the show, and the intervention of prestigious speakers – such as Philippe Monloubou, CEO at Enedis, and Cedrik Neike, CEO at Siemens Smart Infrastructure,  just to mention a few – have attracted professionals from all over Europe to the Paris – Porte de Versailles exhibition center. After having attended the previous editions of POWER-GEN, the editorial staff of IEN Europe was there to testify the success of the combination of the two shows.

Energy transition: not only theory but reality

Europe intends to remain at the forefront of the energy transition challenge, which is already a reality. ‘’We are entering a new era. The ongoing transition is changing everything. With digitalization, more than half a million people are already connected. Energy self-consumers are growing as well as energy storage. More than 20 million people are equipped with smart meters. The question now is: are we ready to meet the objectives for 2030?’’ said Philippe Monloubou during his opening speech on Tuesday 12 November.

With smart meters, smart grids and the arrival of 5G, the revolution is even accelerated and control systems, battery packs and electric vehicles are becoming more and more intelligent. ''Facilitating the energy transition is a responsibility. We need to ensure the excellence of our core business and be ready to face important challenges such as cyber security. At the same time, we need to scale up the transition more massively at an industrial level to have greener companies and prepare the future for the whole community. Our responsibility is primarily to drive the decarbonization wave within the industrial market,’’ continued Mr. Monloubou.

The commitment of the European Union

The European Union is also fully committed to promoting a low-carbon economy for a healthier and more digital world. In the EU Projects Zone, visitors at European Utility Week and POWER-GEN Europe had the chance to know more about the status of all research and development projects funded by the European Commission to find answers and solutions to accelerate the energy transition.

Are we doing enough?

But are we really ready to meet the ambitious Paris Agreement goals and 2030 targets? Are we doing enough? This is what Cedrik Neike, CEO at Siemens Smart Infrastructure, asked to the audience. ''Whatever we think we are doing, it is not enough. But we don’t have to panic; we have to act. The good news is that we have started to do something. However, we can do way more than this. We need to decentralize and to have mass-scale electrification to revolutionize the heating and cooling sector and have a real impact on what we do,’’ said Cedrik Neike.

Siemens has started to electrify itself and its plants. The next steps will be to connect grids and buildings, automate public transports – as Siemens is doing for the metro line in Paris – and save and store more energy. ''Let’s work together and create an ecosystem to make all these targets real,’’ is Cedrik Neike’s hope and call for every small and big company whose commitment can make a difference.

POWER-GEN Europe and European Utility Week will come back next year in Milan from October 27 to 29!

At the Heart of Solar Energy in Australia