More options than ever 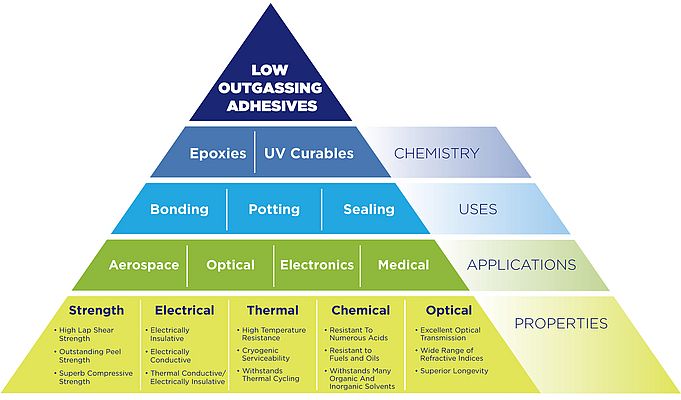 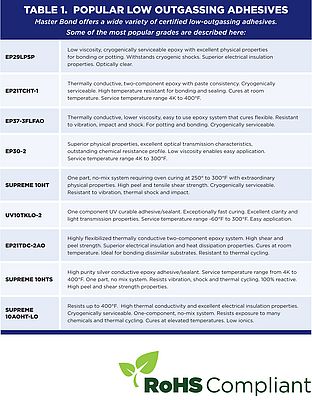 Adhesives that have passed the industry-standard outgassing test (ASTM E595) offer a range of physical properties tailored to aerospace, optical and electronic applications. 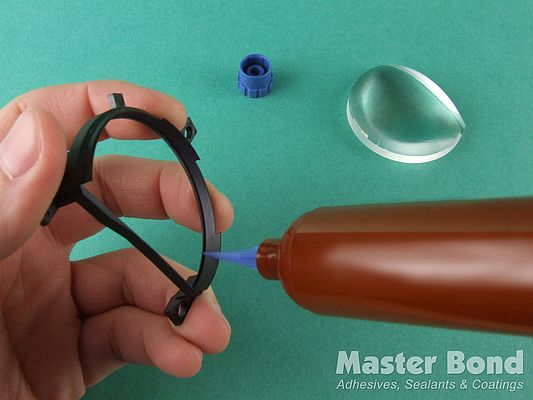 Applications that need to meet stringent outgassing requirements now have more adhesive options than ever.

One of the most common issues addressed by our technical service department nowadays involves the outgassing characteristics of adhesives and related encapsulation and sealing compounds. And that’s understandable because a growing number of high-tech industries have discovered that their products and manufacturing processes can be sensitive to outgassed chemical compounds. As a result, there has been a dramatic upswing in the use of adhesives, encapsulants and sealants that have been specially formulated for low outgassing performance.

While it’s true that some standard adhesives do have good outgassing performance “right out of the tube,” today’s most stringent outgassing requirements are best met by products formulated to pass an industry-standard outgassing test known as ASTM E595-07.

The test’s full title is “A Standard Test Method for Total Mass Loss and Collected Volatile Condensable Materials from Outgassing in a Vacuum Environment”. And engineers working on projects for NASA already know all about it. For years, they have been specifying ASTM E595-compliant adhesives and other materials for use in space systems.

Now that a growing number of engineers with earthbound applications are worrying about outgassing too, here’s a look at what to expect from low outgassing adhesives, encapsulants and sealants:

The first thing to understand about low outgassing products is when to use them (see "Typical Outgassing Applications" for full list). Other than space systems, the most common applications for low-outgassing products are those that involve optical or electro-optical components, which can be clouded or fogged by outgassed chemical compounds. Outgassing can also affect some sensitive electrical processes—by interfering with electrical continuity. Semiconductor manufacturing processes can be very sensitive to outgassing material systems. And commercial vacuum processes can also suffer from outgassing issues.

If you suspect outgassing could potentially pose a problem in your application, specifying adhesives that comply with the ASTM outgassing standard will make sense as long as one of the compliant grades meets all of your other technical requirements. And the good news here is that low outgassing adhesives don’t typically require any sacrifice in other mechanical or physical properties. What sets low outgassing products apart from their generic counterparts is that the low outgassing grades have passed the rigorous ASTM test—often after months of painstaking formulation work on our part.

The time and expense of all that testing and custom formulation do not have major cost implications for users of low outgassing products. The compelling reason to carefully consider whether you truly need a ASTM E595-compliant grade comes down to freedom of choice, not cost.

Consider that Master Bond has hundreds of adhesives that have not been tested for low outgassing and over 20 adhesives that have. By picking an ASTM E595-compliant grade when you do not need one, you may limit your ability to find the best match between your application requirements and adhesive properties. For this reason, engineers should stick with standard products for bonding, sealing, encapsulation and potting applications that have no known sensitivity to outgassing.

With that caveat in mind, the compliant adhesive products available today do cover a wide range of capabilities for those times when nothing else will do. Master Bond offers ASTM E595 products for structural bonding, potting, encapsulation and sealing. Also available are E595-certified electrically and thermally conductive products as well as medical and cryogenic adhesives. Recently, Master Bond introduced a UV-curable adhesive, one of the first in the industry to pass the standard ASTM E595 test.

When looking for low-outgassing products, keep in mind that not all adhesives start on a level playing field when it comes to passing ASTM E595. Some adhesives, such as two-part epoxies, can be specially formulated to achieve outgassing levels well below what ASTM E595 requires. Other types of adhesive chemistries have traditionally not been able to pass ASTM 3595. UV-curable adhesives once fell into this category, which kept these fast-curing adhesives out of some otherwise suitable applications. Only recently have Master Bond’s chemists been able to “crack the code” of UV-curables that do pass the test.

The adhesives that outgas most severely are those that cure through the action of solvents or moisture. These would include a variety of pressure-sensitive and contact adhesives as well as cyanoacrylates. These types of adhesives are not be the best choice in applications that have a known sensitivity to outgassing.

It’s worth noting that even within a given family of adhesives, the outgassing potential of the individual adhesive grades can vary substantially. This variance results from the optimization of each grade’s physical and mechanical properties through modifications to the underlying adhesive chemistry. To take one common example, the more flexible grades within the epoxy family tend to be more prone to outgassing—possibly because they have a lower crosslink density than their more rigid counterparts. At the end of the day, adhesives are best looked at as individuals rather than families when evaluating outgassing performance. And the only way to know for certain whether a specific adhesive meets the low outgassing criteria spelled out in ASTM E595 is to test it.

When selecting adhesives for low-outgassing applications, engineers often don’t pay much attention to cure schedules. That’s understandable since so many modern adhesive formulations do indeed cure well at room temperature, developing better than adequate mechanical and physical properties for their intended use. Yet the addition of a heat cycle will optimize a host of desirable physical properties—low outgassing among them. With adhesives, in other words, it’s often the case that a room temperature cure is good, but a heat cure is better.

In low-outgassing applications, heat can even be essential. Heat tends to improve the crosslink density, which in turn limits outgassing. We’ve seen cases where individual adhesives did not pass ASTM E595 when cured at room temperature but passed after a heat cycle. For that reason, we recommend the addition of a heat cycle for applications where outgassing performance is critical. A typical cure schedule would be room temperature overnight, followed by 2–5 hours at 60-80 C.

The industry standard test for measuring outgassing in adhesives and other materials is ASTM E595. Developed by NASA to screen low-outgassing materials for use in space, the test determines the volatile content of material samples placed in a heated vacuum chamber.

Materials pass or fail the test based on these TML and CVCM measurements. If the CVCM exceeds 0.1 percent, the material fails. The material will also fail if the TML exceeds 1 percent—though the TML may be offset by water vapor regained (WVR) by the sample in a subsequent measurement:

While you will occasionally run across proprietary outgassing test methods, their results should not be considered credible. ASTM E595 currently represents the only widely accepted industry standard for quantifying the outgassing performance of adhesives. The test does have its limitations. Among them, this 24-hour test doesn’t predict long-term outgassing performance. Nor can it determine what specific outgassing contamination, if any, will occur in real world operating conditions. Despite these limitations, though, the test is a good way to evaluate and compare the outgassing potential of adhesives and other materials.

Industrial Equipment & Supplies
Master Bond Polymer System EP38 is a fast curing, low viscosity, optically clear two component epoxy system for high performance coating, bonding and sealing. It is 100% reactive and does not contain any volatiles. The mix ratio is 3 to 1 by weight.
Read more

Industrial Equipment & Supplies
Kaeser Compressors. The U.S. Department of Energy estimates that air compressors use as much as 10% of all electricity generated in the United States. Further, the DOE calculates that as much as 50% of this energy is wasted. Compressed air leaks alone account for 25-30% of compressed air use. Consequently, many industrial companies are identifying ways to lower their compressed air system energy consumption....
Read more