Bauer Gear Motor was awarded for its integrated electrical torque monitoring solution for geared motors, making the company one of the leaders in implementation of Industry 4.0 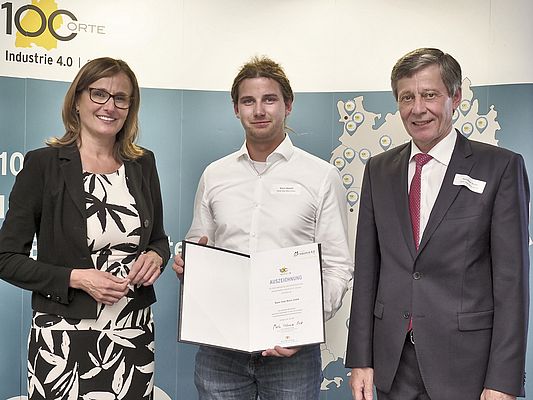 Bauer Gear Motor has been recognized as innovation leader in Germany thanks to the prestigious award it obtained from Allianz Industrie 4.0 Baden-Württemberg on 2nd of July. The award was presented for its integrated electrical torque monitoring solution for geared motors, the TorqueControl 4.0 system.

The TorqueControl 4.0 system is designed for rapid electronic torque measurement, a mechatronic solution integrated in the gear motor. This enables Bauer’s geared motors to be linked to Industry 4.0 networks and helps to protect, immediately and reliably, the powertrain from overloading. A mains-powered geared motor can be enabled with TorqueControl 4.0 and integrated via IO-Link into the machine control interface.

Karl-Peter Simon, Bauer's Managing Director, explained: "By collecting rapid and accurate current and voltage measurements, we are able to use TorqueControl 4.0 to automatically shut off the drive system when overload occurs and to display, report and assess torque progression cyclically. The system's PLC can use this information to monitor the gear motor status and protect the system without requiring an extra mechanical torque overload clutch. Additionally, continuous load-point recording enables us to alter the motor's magnetisation by adjusting the voltage. As a result, efficiency can be significantly increased by up to 25% in applications run primarily in the partial-load range”.

Allianz Industrie 4.0 Baden-Württemberg is a networking initiative aiming to join key innovators and support businesses who are pursuing developments in Industry 4.0. The awards have been taking place since 2015, with a total of 127 companies so far being recognised for their efforts.

The award was presented by Katrin Schütz, State Secretary at the Ministry of Economic Affairs, Labour and Housing of the state of Baden-Württemberg (Germany), who commented: "Medium-sized industrial companies and start-ups in Baden- Württemberg are leaders in the implementation of Industry 4.0, as today's awards demonstrate."