Bearings keep on rolling with the wind 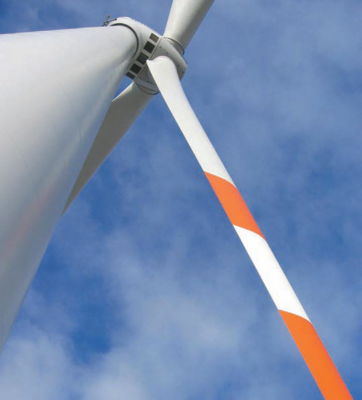 Bearings keep on rolling with the wind

Wind turbines consist of a rotor that is attached to the nacelle, which sits at the top of a tower. Within the nacelle are the main rotor, gearbox, generator, controller and brake. A cover protects the components inside the nacelle. The entire nacelle pivots to align optimally with the wind in order to prevent extreme loads and allow cost effective operation.

Wind turbines are designed to last for approximately20 years. Therefore, the extended bearing rating life calculations should yield values of between 120,000 and 170,000 hours. Due to their location, onshore on hills and slopes, or several kilometres offshore and large tower heights, it is also critical that wind turbines have long maintenance intervals.

In wind turbines, the rotor shaft is of paramount importance, since this is where all the induced wind forces (radial and axial) and moments act directly. As a result, the rolling bearings are subjected to high dynamic loads and operating conditions. Besides the normal operating conditions, which include extremes of speeds and loads, the bearings must also cope with high transient loads at start up and shut down, idling under lowloads and non-rotation, where fretting and brinelling of the raceways can occur.

Another challenge is the assembly and installation of the main rotor shaft bearings, which can weigh hundreds of kilogrammes and have outer diameters of greater that one metre. Special tooling is often required, along with a means of uniformly heating the bearings, usually with an induction heater. Typical locating (floating) bearing arrangements are spherical, cylindrical or tapered roller bearings.

A generator operating in the nacelle of awind turbine is subjected to significantly greater vibration loads than its counterpart on the ground. This too can place greater strain on the bearing and the lubricant. In the design of bearings for a generator, it is the speed, size and design that play an important role. Particular attention must also be paid to the lubricant and protection against possible current passage.

The bearing arrangement for a generator typically contains two deep groove ball bearings or one deep groove ball bearing and a cylindrical roller bearing. The passage of current in a wind turbine generator can cause serious damage to the bearing raceways in the form of melt craters and false brinelling, leading to premature failure and costly repairs. In many cases, it is sufficient to fit insulated bearings, which are available with coated rolling element bearing rings or hybrid bearings with ceramic rolling elements. In addition, hybrid bearings with ceramic rolling elements give longer grease operating life.

As well as the highly developed design and precise manufacturing methods, the reliability and operating life of a bearing is influenced to a large extent by lubrication. Selection of the correct grease, the performance capability of the oil, the effect of additives, cleanliness in relation to contaminants, and adherence to the specified lubrication intervals, contribute towards determining the overall reliability of the system.

Generally, wind turbine bearings are supplied with special greases that have been developed in partnership with renowned lubricant manufacturers and are subjected to a comprehensive series of tests before being approved.

In order to aid the design process the Bearinx software can be used to model and calculate all bearing types, complex shaft systems and even complete gearboxes. The support reactions, bearing internal load distribution and contact stresses, as well as details of the lubrication film, are all taken into account in order to determine the calculated bearing life. For even more detailed analyses, FEA (Finite Element Analysis) can be used to determine the influence of adjacent structures (i.e. shaft and housing onbearing life).

With 7.5MW and 10MW wind turbines now under development, demands on the bearings are likely to increase. The bearings will have to cope with extremes of loads, speeds and temperatures, while operating reliably and with minimum maintenance. Greater demands will also be placed on the lubricants, whether it is oil or grease, to give improved long term bearing operational performance with longer maintenance intervals.

In order to reduce maintenance costs, permanent monitoring of wind turbine rolling bearings operating under harsh conditions is becoming increasingly necessary. Condition monitoring can be used to detect bearing defects at an early stage preventing catastrophic failure, high replacement costs and lower farm efficiency. This means that maintenance can be planned and costly consequential damage avoided. It is better to replace a few bearings and associated components rather than the complete gearbox.

There is also the issue of lead times. Condition monitoring enables maintenance to be planned at a time that is convenient to the operator and enables parts to be ordered inadvance, thereby minimising downtime.