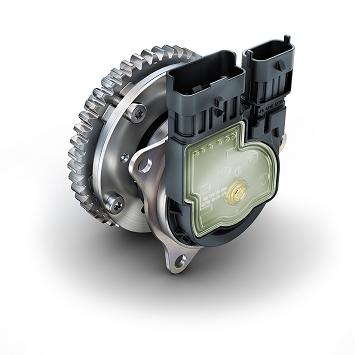 Schaeffler has announced that it will shortly commence volume production of its electromechanical camshaft phasing system for passenger cars.

The use of electromechanical phasing units rather than the current standard hydraulic systems allows the camshaft to adjust more quickly and accurately to prevailing engine operating conditions. This reduces fuel consumption and harmful emissions, while simultaneously increasing driver comfort during stop/start operations.

The last few years have seen a boom in camshaft phasing systems, which control timing of the opening and closing of engine valves. This enables optimum phasing of the cylinder intake/exhaust cycle, with engine speed and torque demands. Previously used only in high performance engines, variable opening and closing of inlet valves is now standard technology in modern petrol engines. Camshaft phasing systems are now also being used more frequently on the outlet side too, including some of the latest diesel engines. Until now, almost all camshaft phasing units have used hydraulic systems.

Electromechanics makes it possible to phase the camshaft at speeds up to 600 crank angle degrees per second. Hydraulic systems operate two to ten times more slowly, irrespective of the engine speed and temperature. The increased dynamics of electromechanical phasing units enable very fast reaction times to changes in load, even at low engine speeds, including when the driver suddenly pushes down on the accelerator pedal while the engine is overrunning. Unlike hydraulic systems, the reaction speed to a change in load is not dependent on the oil supply. In some cases, it is no longer necessary to have a larger engine oil pump, which results in reduced fuel consumption.

Also, starting and stopping the engine is much smoother with electromechanical camshaft phasing units. This is important not only for stop/start operations but also for hybrid vehicles. It is possible to start an internal combustion engine without any noticeable ‘judder’ because, up to 200rpm, the engine runs with reduced compression because the camshaft can be positioned as required before the engine starts. During acceleration, valve control times are synchronised with fuel injection so that a soft onset of compression occurs; when compression and ignition are correctly adjusted, the result is smooth engine start up.

In design terms, Schaeffler offers a very compact solution consisting of a brushless DC motor and a high reduction ratio gear unit. The gear unit is based on a flexible toothed belt with an oval rolling bearing. This transfers the engine speed at a ratio of approximately 70:1. “We therefore achieve a very good balance between the size of the electric motor and the phasing speed. Our gear units also operate completely silently,” explained Martin Scheidt, Engine Systems Development Manager at Schaeffler. Due to its compact design, the electromechanical camshaft phasing unit from Schaeffler occupies the same design envelope as a hydraulic system.

The electric motor also contributes to the phasing accuracy, as it serves as both an actuator and a sensor. In addition to the position recognition already in use with hydraulic systems, usually four times per camshaft rotation, in the electrical system, rotor position is checked continuously by integral sensors and assessed by an electronic control system. The precise position of the camshaft is therefore always known. Schaeffler developed the DC motor in house. “We couldn’t find any motors on the market that satisfied our requirements for accuracy and durability,” stated Scheidt, justifying the decision.

The trend is towards a central valve phasing system that can reach higher phasing speeds using less oil. “Overall, we can see a clear trend towards highly versatile valve trains,” said Scheidt. “Strict CO2 regulations mean that more and more automotive manufacturers are using cylinder deactivation systems.” In order to meet the demands from different customers, Schaeffler is developing a range of technologies from switchable roller finger followers, to the fully variable electrohydraulic “UniAir” system, which allows stepless variation of valve lift.

Portfolio of Plug & Use Active Devices