Equipped with the 9th Intel® CoreTM I CPU generation 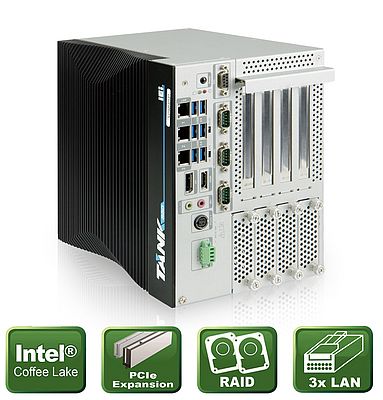 ICP Deutschland released the new TANK-880-Q370, an embedded system which combines numerous PCIe slots, many hard disk bays, many communication interfaces and a lot of CPU performance in its fanless 9.7 liter case. The TANK-880-Q370 is offered in standard versions with an Intel® CoreTM i7-9700TE 8-core processor or an i5-9500TE 6-core processor and 8 GB DDR4 memory. The main memory can be expanded to a maximum of 64GB via two DDR4 SO-DIMM slots. The embedded system offers its users flexible expansion options through numerous PCI Express slots. One PCIe x16, two PCIe x4, one PCIe x1, two M.2 2280, one M.2 2230 and one full size mini-PCIe slot are available. Moreover, the TANK-880-Q370 offers four front-accessible drive bays for common storage media. In addition to AHCI, the Intel® Q370 chipset also offers RAID modes 0.1.5 and 10 on its four SATA 6Gb/s.

A total of three GbE LAN interfaces, one Intel® i219 and two i210, are available as communication interfaces. In addition, six USB 3.2 (Gen 1.), three RS-232/422/485 with 2.5kV isolation, four digital inputs and outputs each, one audio line-out and one Mic-IN input. For the connection of displays the HDMI1.4b or the display port can be used. Further display connections such as VGA, DVI, HDMI, LVDS or DP can be made via the internal iDP interface and the corresponding iDP expansion module. To secure the system, the TANK-880 provides a TPM 2.0 slot which can be expanded with the optional TPM-IN02-R20 module. The TANK-880 can be operated in a voltage range of 9 to 36 VDC and in a temperature range of -20 °C to 60 °C. The compact housing with 169x255x225mm can be easily installed with the included wall brackets.

Nidec ASI Grows in Northern Europe under the Flag of Sustainability