The second edition of Global Industrie takes place from March 5 to 8 and addresses the global industrial ecosystem and the major players of economics and innovation around the world, with the aim of envisioning the factory of the future 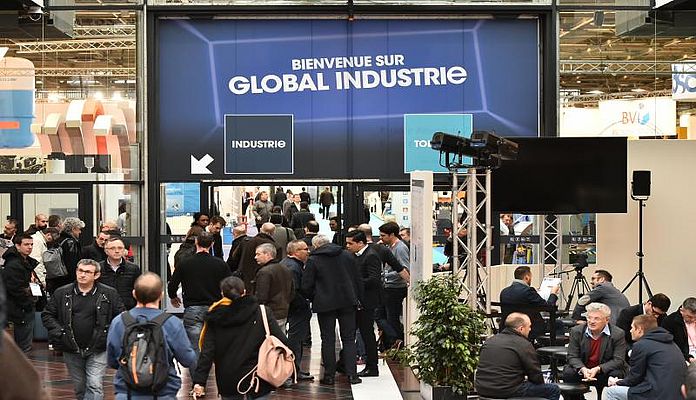 The second edition of Global Industrie, the French exhibition addressing the global industrial ecosystem and the major players of economics and innovation around the world, has opened its doors the 5 of March at Eurexpo Lyon.

The exhibition gathers four leading shows in France (Midest Smart Industries, Industrie and Tolexpo), to reach every sector of the technological innovation and support the transition to the industry of the future. Around 2500 exhibitors are expected, of which 40% are international companies. A real success for a show that was launched just last year in Paris.

Global Industrie aims, first thing first, to be a point of observation of the industrial policies in France, but also to be a place where the status of the industrial revolution – from robotics, to industry 4.0 and artificial intelligence – is carefully taken into consideration and discussed.

IEN Europe visited the show, which is impressive in terms of size, number of international exhibitors and countries represented. At the show, we met the following companies:

What impressed us as well was the number of partnerships and collaborations existing among companies (SMEs and start-ups with big corporations and also Large Enterprises together in a sort of consortium, as in the case of the Gfi - SAP Village), in a spirit of co-creation based on a collaborative model. For example, one of the main highlights at Schneider Electric booth, was the acquisition of 60% of the company Aveva - leader in industrial software - that accelerates the digital transformation of Schneider Electric, with an expansion from purely OT to IT.

Artificial Intelligence is, as we can imagine, one of the most important highlights of the exhibition, when it comes to the discussion around the Industry of the Future.

Many start-ups are revolutionazing their approach to AI, with the purpose of meeting specific needs of the industry and being prepared for the future. ‘’Artificial Intelligence is often expensive and not adapted to customers’ needs. That’s why we invented a new way of creating AI, based on the replication of human brain. Essentially, we take human brain as an inspiration to create functional, simple and adapted industrial applications, without the need to be connected to the cloud.’’ said Jean-Michel Deligny, Corporate Finance Strategy at anotherbrain, a promising start-up launched in France in 2017 by the French entrepreneur and expert in robotics Bruno Maisonnier, a pioneer of the so called ''Organic AI''.

RS Components, the French distributor of B2B industrial products, exhibits for the first time at Global Industrie Lyon putting in the spotlight its solution for Predictive Maintenance, which has three main objectives: 1/ Providing not only solutions but also services to the client; 2/ Helping clients reduce their costs for maintenance 3/ Taking the most out of the data collected in the connected industry.

The Smart Maintenance Management solution from RS Component is an i-Maintenance platform that allows predictive maintenance and the analysis and stock of every component destined for maintenance. The platform enables a reduction of 15% of the volume of parts on maintenance so that the client can focus only on their critical parts of the production. Predictive Maintenance is possible thanksto the exchange of information between the system and the CAAM software.

Global Industrie will close its doors on March 8th.

Artificial Intelligence, Industry 4.0
The Advantech Global IIoT Virtual Summit, taking place from 22-25 September, will showcase the latest innovations in artificial Intelligence and the Industrial Internet of Things. The event will bring together technology leaders like Bosch and Ericsson
Read more

Real-time Data: How to Take Advantage of 5G Opportunities?

Artificial Intelligence, Automation, Industry 4.0
Oracle set up a webcast highlighting the 5G revolution in the IT ecosystem
Read more