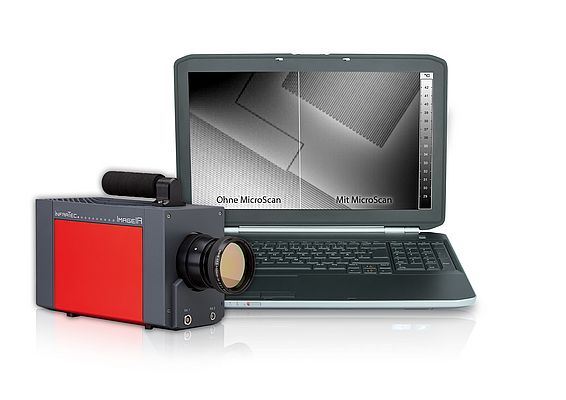 Concepts for increasing the geometrical resolution of thermographic cameras have belonged to the state of the art of technology for years. InfraTec is now taking this one step further. With MicroScan, the company is introducing an option to quadruple the image format for a radiometric thermography camera used in the civil sector with cooled FPA photon detector for the first time. For models of the ImageIR® high-end camera series, this means that images can be recorded with up to (2,560 × 2,048) IR pixels (5.2 Megapixels). Users profit from a greatly improved resolution of fine structures in the thermogram.

Behind the function is a newly developed, fast-rotating MicroScan wheel, which is integrated into the camera. It ensures that four different individual exposures are taken per wheel revolution, which are offset laterally by half a pixel each. These individual exposures are brought together in real time into a thermogram with quadruple image format. Each pixel in the image represents a genuine temperature measured value and not an interpolated image point. In this way, thermography achieves a new quality. Through the spatial oversampling of the MicroScan, images gain in quality noticeably. For example, creation of aliasing artefacts in the image can be prevented.

All this is done not only precisely, but also at enormous speed. How quickly this happens is shown by the example of the ImageIR® 8300 hp. If the camera is in full-frame mode with its (640 × 512) IR pixels, the MicroScan wheel turns much faster than 5,000 revolutions per minute. Thanks to such high speeds, users with MicroScan can thermographically analyse processes with moving measurement objects or changing temperatures. The technology is not only predestined for use in micro-thermography, but also for a wide variety of security applications.

New quality in recognition of details

Regardless of whether the measurement has a static or dynamic character – the unusual richness of detail in the thermogram's image representation is very impressive. The exposures are extremely low in noise and show the measurement objects with very fine resolution. A look at the edge transitions of the objects shows this especially well. Angular object edges or curves are also reproduced exactly even when digital zoom expands the image section greatly. Use of MicroScan simplifies evaluation and analysis of thermograms for the user, as considerably more details can be recognised on the images.

Gas Sensors for the Energy Industry

Automation, Covid-19, Industry 4.0, Sensor Technology, Test & Measurement
The health crisis forced many event organizers to postpone or cancel their shows. In the trade industry, the shifts have been significant. Here you find an updated list of major trade events that were postponed or cancelled
Read more