Free, fast and intuitive design software opens up new possibilities for engineers from concept design through to manufacturing 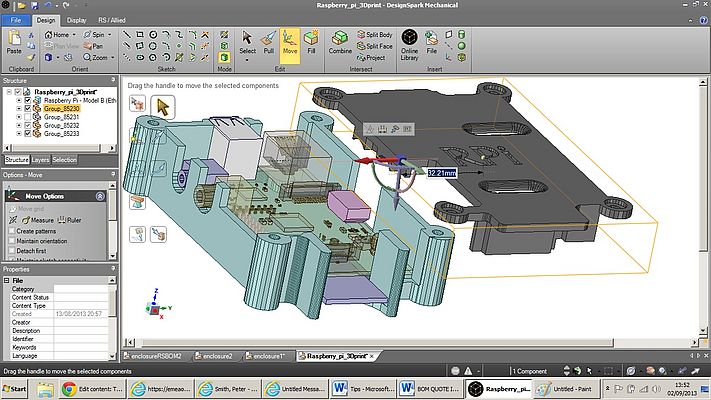 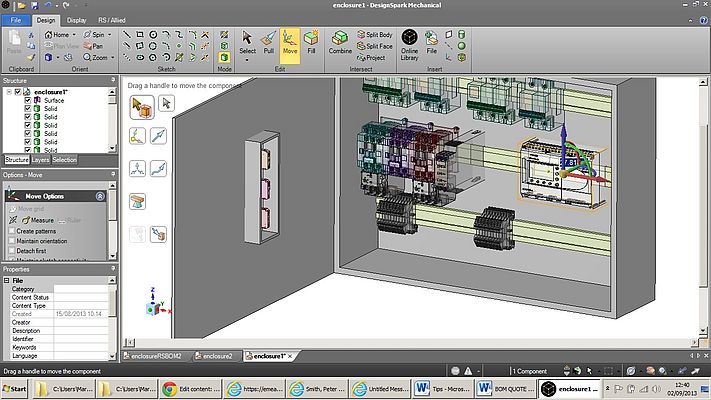 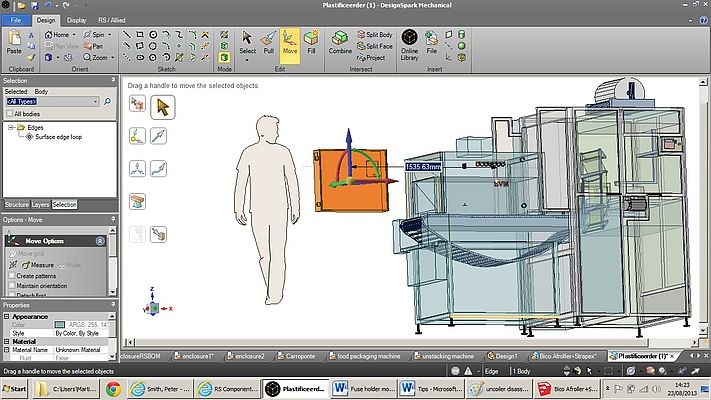 RS Components (RS) and Allied Electronics (Allied) announced a significant development in the history of 3D design software with the launch of DesignSpark Mechanical, a new 3D solid modelling and assembly tool that is available to all - totally free of charge. Developed in conjunction with SpaceClaim, a provider of flexible 3D modelling software for engineers, the new easy-to-use DesignSpark Mechanical is set out to bring major benefits to design engineers around the world and is available in multiple languages.

The availability of DesignSpark Mechanical overcomes the two major barriers to entry faced by potential users who do not currently have access to a 3D design solution, but who could benefit from the use of 3D modelling to quickly develop sophisticated concepts and products. These impediments are the prohibitive costs and the considerable investment in learning time associated with traditional 3D CAD tools. Not only is DesignSpark Mechanical free, its simplicity of use means that engineers and others involved in product development can become fully conversant with the software within minutes, rather than the weeks or months required to become skilled with traditional 3D CAD tools.

"The launch of DesignSpark Mechanical is the first time a 3D design tool with this level of sophistication has been made freely available. Engineers will love using modelling software that is so intuitive and flexible," said Glenn Jarrett, Global Head of Product Marketing at RS Components. "The use of DesignSpark Mechanical early in the design cycle can eliminate much of the time-consuming rework associated with traditional product development processes. This is a highly significant initiative that helps engineers to bring innovative products to market quickly, and DesignSpark Mechanical's STL output format enables direct export of designs to 3D printers."

With access to more than 38,000 3D models in the extensive DesignSpark online component library, DesignSpark Mechanical gives all engineers the ability to rapidly undertake an end-to-end design with professional-grade modelling tools that are at zero cost. RS and Allied have also collaborated with 3D content company TraceParts to provide access to millions of models from the online tracepartsonline.net CAD portal in DesignSpark Mechanical format.

"Allied and RS are partnering with SpaceClaim to launch DesignSpark Mechanical, which combines the power and ease-of-use of direct modelling technology from SpaceClaim with access to the massive library of standard parts from RS and Allied, trusted by millions of engineers around the world," said Rich Moore, vice president of business development for SpaceClaim. "Feature-based CAD is more difficult to learn and with DesignSpark Mechanical, users can rapidly create 3D models to accelerate engineering design and improve their competitive advantage."

The active base of 3D CAD seats globally is currently estimated at approximately 1.5 million. However, it is also estimated that there are an additional 20 million engineers globally who do not currently use 3D CAD, but could significantly benefit from a tool such as DesignSpark Mechanical. It will not only enable design engineers to be more creative, but will also support a more efficient product development process, allowing the production of professional concepts right through to delivering detailed and dimensioned manufacturing blueprints.

DesignSpark Mechanical employs a methodology called 'direct modelling', which is very different from traditional feature- or parametric-based 3D CAD software. The tool uses simple gestures that enable real-time editing and instant feedback, making it possible for engineers and others to create geometry and easily explore ideas and product concepts in 3D. All basic designs can be achieved quickly and easily via the use of the software's four basic tools - Pull, Move, Fill and Combine - in addition to its employment of familiar Windows keyboard shortcuts such as cut/paste, undo/redo, which makes it highly intuitive for new users.

The software can also be used as a complementary 3D tool in the product development process for the creation of early concept designs, for instance, alongside 3D CAD tools that are already in use today. The tool can remove bottlenecks in the early design process by allowing changes and additions in seconds, rather than having to wait for the CAD department using the traditional 3D tools to rework the design.

3D designs can also be exported in STL, the standard file format to enable rapid prototyping builds and computer-aided manufacturing, in addition to providing the ability to quickly obtain Bill-of-Materials (BOM) quotes via the RS and Allied websites. The tool can also import circuit layout files in IDF format from any PCB design tool, including the award-winning DesignSpark PCB software.

Automation
Free, fast and intuitive design software opens up new possibilities for engineers from concept design through to manufacturing
Share with
Print
Advertise with us
More products from this supplier

Industrial Equipment & Supplies, Industry 4.0
IEN Europe interviews Mark Pontin, Managing Director at Resolve Optics, to learn more about high quality optical lenses, why customers are increasingly choosing application-optimised lenses and how his company is serving the markets that use them
Read more

Automation
Free, fast and intuitive design software opens up new possibilities for engineers from concept design through to manufacturing
Read more
Advertise with us
Related articles

How Additive Manufacturing Can Help 5G

Automation, Industry 4.0
The discussion around 5G is gaining momentum, but the technology is not yet ready for industrial IoT. Linda Tsai, President of IIoT at Advantech, explains why it’s important to be prepared for the upgrade to 5G as soon as the technology is mature
Read more

Artificial Intelligence, Automation, Covid-19, Industry 4.0
The pandemic has opened companies’ eyes to the urgency of digitalizing their factories. Making concepts likes Machine-as-a-Service possible, blockchain technology could be part of the solution
Read more

The Value of Engineering in Critical Times

Artificial Intelligence, Automation, Covid-19, Industry 4.0
Coronavirus has confronted us with innumerable challenges. Some of them were already on the plate and are now urgent objectives to achieve. The lack of engineers, for instance, is a reality and weighs more heavily in times of crisis
Read more