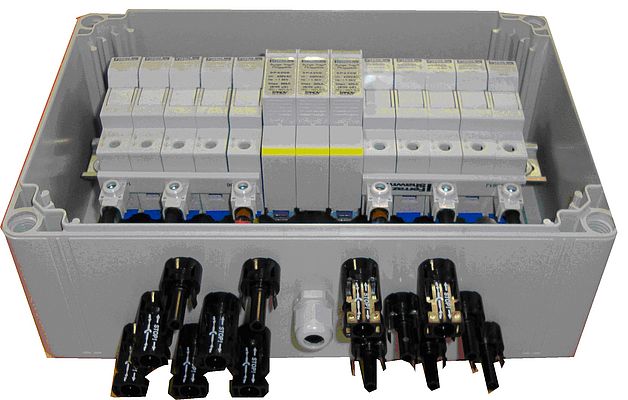 Energy rise future challenges include continuously increasing needs due to the depletion of fossil fuel reserves and urgent climate concerns. One answer is the photovoltaic market, growing around the world as renewable energy is in general.

To manage this trend and ensure safety around the solar technology, manufacturers of solar components and equipment, designers of installations, engineers, etc., have to follow specific regulations and standards edited by international and national committees.

The fact that a solar device is both a d.c. environment and a non interruptible source of current whenever the sun is shining makes things pretty complicated compared to our customary a.c. world. Ensuring the safety of solar power generating facilities is a tricky business, because there are very specific risks inherent to this kind of electrical equipment.

One of the most important safety components is the fuse. Installed in series, its purpose is to conduct normal current and to protect equipment and people from the potential effects of overcurrent, like overheating / fire / external arc / etc.

A new specific standard for fuses was published in 2010: IEC 60269-6 Ed 1 Low–voltage fuses _ Part 6: Supplementary requirements for fuse-links for the protection of solar photovoltaic energy systems.

This new type of fuses is currently called “gPV”: general purpose fuse for photovoltaic applications. The requirements of that standard apply to fuse-links protecting PV strings and PV arrays in equipment for circuits of nominal voltage up to 1500Vdc. They define, for example, the minimum breaking capacity (mbc), rated breaking capacity, and conventional  times and currents.

Why a dedicated fuse?
gPV Fuses are designed and tested specifically for DC applications. When a fault occurs in a DC circuit, the absence of natural voltage zero crossing makes the interruption of DC faults more difficult than the interruption of AC faults because only the arc overvoltage generated by the fuse will force the current to decrease to zero.

The short circuit current depends on the number of strings and the Isc of the solar panels. The possible low level of overload to be eliminated in photovoltaic equipment is a very arduous condition for a fuse.

No fuse is required for PV installations with number of strings lower than 3 because the short circuit current is too low to melt the fuse.

To follow customers on all markets, Mersen’s HP6M and HP10M photovoltaic (PV) fuse series were engineered and designed specifically for the protection of photovoltaic systems in compliance with both standards. Their enhanced fuse construction makes them ideal for continuous temperature and current cycling withstand, adding to system longevity.

In conclusion, dedicated photovoltaic fuses have to be designed and tested in accordance with the “gPV” standards for PV applications to ensure people’s safety and photovoltaic circuit protection.

Electronics & Electricity
With a more compact shape, it can lower power losses, and has recommended torque 2Nm
Read more

Electronics & Electricity
We've shortened our name. And increased your expertise in reducing downtime for machines and processes
Read more

Electronics & Electricity
We've shortened our name. And increased your expertise in reducing downtime for machines and processes
Read more

We’ve shortened our name. And increased your expertise in the safe and reliable transmission, distribution, and control of power

Electronics & Electricity
We've shortened our name. And increased your expertise in reducing downtime for machines and processes
Read more
Advertise with us
Related articles