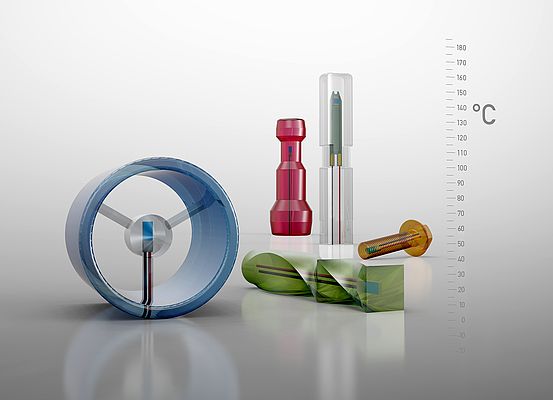 JUMO presents a completely new process for manufacturing temperature probes in the form of plastoSENS. In this process, the sensors are not potted in a metal pipe as was the case up to now. Instead, they are coated with plastic in an injection molding process. The patented system offers a range of benefits compared to the conventional temperature sensors.

The biggest advantage of the plastic sensors is the complete design freedom. JUMO plastoSENS products can be adapted to the respective installation conditions. For example, the complete integration of a temperature sensor in a plastic pipe is possible. In addition to the reduced weight, a further benefit is the high reproducibility. A probe with an insulation resistance of 5 kV for use in transformers, a vibration-resistant push-in probe for oil media, and a waterproof/steam-proof probe for sterilization applications are currently under development.

JUMO plastoSENS temperature sensors can be used for temperature ranges of -50 to +200 °C. The use of special plastics enables a thermal conductivity similar to that of metal. Use of special additives allows for the development of customized plastics for a variety of applications.

JUMO plastoSENS products are created in close collaboration with customers. The process starts with a feasibility test and a design proposal, followed by the design and simulation of the sensors and ultimately leads to the construction of the injection-molded tools. The tests start after a sampling phase and, at the end, we are left with a functional prototype and series production can begin. Thanks to modern software, it is possible to simulate the response behavior and thermal conductivity of the planned sensor at a very early stage in the development processes.

70 Years of Experience in Measurement and Sensors