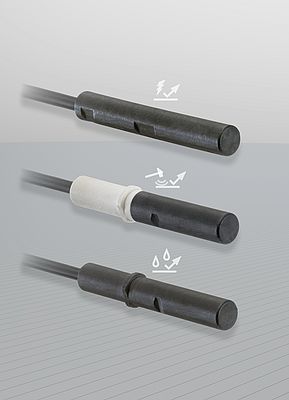 JUMO plastoSENS is a completely new process for manufacturing high-quality measurement technology. The sensors are coated with plastic in an injection molding process. The first temperature probes are now demonstrating this revolutionary technology's wide variety of applications. The products are characterized by complete freedom of form as well as a low weight and high reproducibility. In addition, they have an extraordinary insulation resistance. Using high-temperature plastics enables a response time similar to standard probes made of metal. Three initial developments for various industries and applications demonstrate the potential of the technology.

The plastoSENS T temperature probes made of high-temperature plastics are both electrically insulating and thermally conductive. This makes them easy to use in environments with very high currents and voltages such as in transformers, generators, or combined heat and power plants. JUMO plastoSENS T01 is a standardized, voltage-resistant probe with an insulation resistance of up to 10 kV and which can be used at a continuous service temperature of -50 to +200 C. Conventional temperature probes can withstand a maximum of 2.5 kV.

Vibration represents a major problem for measurement technology in engines of vehicles or machines. Placing the temperature sensor in the probe tube so that it is truly in a secure position is very complex with conventional probes. However, in the case of JUMO plastoSENS T, the sensor is completely coated in plastic. JUMO has therefore developed a vibration-resistant and shock-resistant push-in probe that can easily withstand forces of up to 20 g and can be used in almost all liquids in a temperature range of -40 to +180°C. JUMO plastoSENS T02 is also characterized by being highly fail-safe and having a low natural frequency in the event of vibrations.

In sterilization applications or CIP cleaning, sensors are exposed to a particularly stressful combination of high temperatures, moisture, and pressure. With the JUMO plastoSENS T03 probe for sterilization applications, the applied high-temperature plastics form a substance-to-substance bond during the injection molding process and thereby guarantee steam and water tightness. This is an invaluable advantage, particularly for the cable outlet from the probe, which is a critical point. The FDA compliant probe can be used in a temperature range of -50 to +150 C.

70 Years of Experience in Measurement and Sensors