ZSW sets European record of efficiency for CIGS cells, raising it to 22.6% 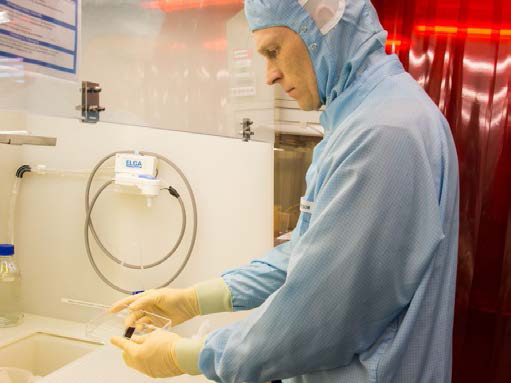 The Centre for Solar Energy and Hydrogen Research Baden-Württemberg (ZSW) just set a new European record. Scientists in Stuttgart managed to raise the efficiency of thin-film solar cells made of copper indium gallium diselenide (CIGS) to 22.6 percent. The success was achieved by optimizing various manufacturing processes. The technology, according to experts the favored alternative to conventional silicon photovoltaics, could soon take a bigger slice of the market pie. The industry is already taking a keen interest in CIGS-based solutions.

The record-setting cell made by ZSW has a surface area of 0.5 square centimeters, a standard size for test cells. It was produced in a laboratory coating machine using the co-evaporation method. "The techno-logical potential is far from tapped out at 22.6 percent efficiency," says Prof. Michael Powalla, ZSW board member and Head of the Photovoltaics division. "It will be possible to achieve up to 25 percent in the next few years."

These researchers have a deep well of expertise to draw on, as sever-al world records in recent years would attest. The current record was set by optimizing production processes in various ways. The Fraunhofer Institute for Solar Energy Systems ISE has confirmed the results. ZSW is now only 0.3 percentage point behind the current world record.

A race between solar power technologies

CIGS technology has made great strides in recent years. It overtook its market-dominating competitor, the multicrystalline silicon cell, some time ago in the cell efficiency competition, extending its lead to a full percentage point. In module efficiency, silicon PV is still ahead. Commercially available modules have about 17 percent, CIGS modules about 14 percent.

Manufacturing costs amount to just 40 cents US per watt even in small CIGS factories, and they can be slashed by expanding production capacity. Given an annual output of 0.5 to 1 gigawatts, CIGS PV plants can achieve 18 percent or greater module efficiency and costs as low as 25 cents per watt. This means costs can be brought down to a competitive level even at a relatively low output, so it follows that CIGS PV manufacturing requires less upfront investment than silicon PV production.

Market opportunities for thin-film photovoltaics on the rise

Thin-film technology has other advantages as well. The fact that modules deliver higher yields under low light conditions and are more shade-tolerant is a major selling point for people who own solar power systems. The modules' sleek, streamlined look fits in much better and makes a more attractive addition to roofs and facades. On top of that, it takes less energy to manufacture CIGS modules than silicon PV. Flexible versions featuring high-efficiency CIGS are also in the works.

The efficiency rates achieved in the southwest of Germany are also of interest to the industry. Manz AG, ZSW's industry partner, recently decided to continue its commitment to CIGS and is developing this technology further in a joint effort with ZSW.

The timing of this move could not be better in view of the booming global photovoltaic market. A record amount of solar power capacity, 52 gigawatts, was installed in 2015, and annual demand is expected to rise to more than 100 gigawatts in the next few years. And that means the world will be needing new solar factories.