for its iVu series vision sensor 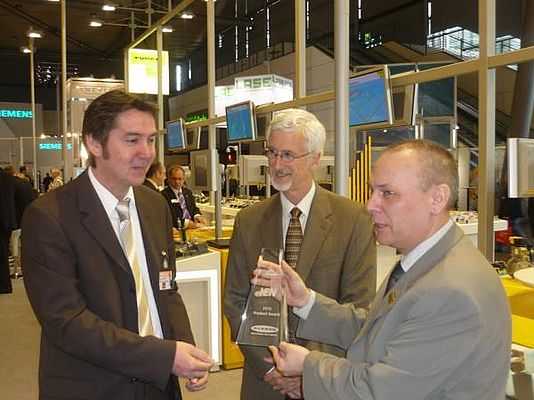 Handing over the IEN Europe Award 2010 at HANNOVER MESSE

Traditionally handed over during HANNOVER MESSE, Banner Engineering received this year’s IEN Europe Award for the innovative, easy-to-use vision sensor for quality inspection. Exhibiting their products at the stand of their strategic partner Turck, Peter Mertens, Managing Director Europe of Banner Engineering, talked about the product features that make the vision sensor so unique, as well as future developments in the iVu product family, in an exclusive interview with IEN Europe's editor-in-chief Jürgen Wirtz.

IEN Europe: Mr Mertens, please sum up the main features of the iVu series vision senor.
Mertens: The product was actually developed keeping in mind that there is an audience that doesn’t want to go too deeply into vision technology as such. It was designed as an easy-to-use and quickly-to-set-up product, without the need for a PC. As a result, we developed a vision system that you can set up directly from the display, just like you would set up your mobile navigation system. This was really our major goal: making the use of the vision sensor as easy as possible. And with the response we got from the customers so far, we really think that we succeeded in that.

IEN Europe: Your last remark leads to the next question: After the product release roughly one year ago, how has the response of the market been so far, and where are the main areas of application?
Mertens: The main areas of application are clearly in the field of factory automation, which means automating quality inspection. Most recently we saw a significant response boos tfrom the market when we released the bar code device. It looks exactly the same, is also very easy to install, and it can read multiple and various kinds of bar codes, all at the same time. So the user puts the bar code underneath the sensor, and the information - the content of the bar code- is immediately displayed on the screen. That is one of the features that customers obviously like.
The bar code device for us was the next most logical development to extend the iVufamily. And we will surely see more devices in the future, using exactly the same platform.

IEN Europe: Can you already say what the next developments in that direction will be?
Mertens: That’s perhaps a little bit too early to talk about. At the moment, we have the two hardware platforms, the one with the built-in-display, and the one with the remote display. And we have the unit for quality inspection, that just received the award, and the bar code reader, that saw the light of day most recently.
There are two major developments we are pursuing at the moment on this platform: one is the capability to store multiple inspections in one unit, because at the moment it’s only on ethat can be stored. And the second one is the communication interfaces. Currently, we only have RS232 available. But we will be adding Ethernet interfaces in the future.

IEN Europe: In which time span will those further developments be realized?
Mertens: They will be realized probably by the end of 2010.

IEN Europe: Mr Mertens, thank you very much for the interview, and congratulations again for the award.

Laser Sensor For Positioning And Measuring

Sure Cross MultiHop Radio with I/O

Sensor Technology
a 2D & linear barcode reader or an inspection sensor, both imaged based
Read more

Automation
With illuminated base for increased safety and productivity
Read more

Sure Cross MultiHop Radio with I/O

Sensor Technology
a 2D & linear barcode reader or an inspection sensor, both imaged based
Read more